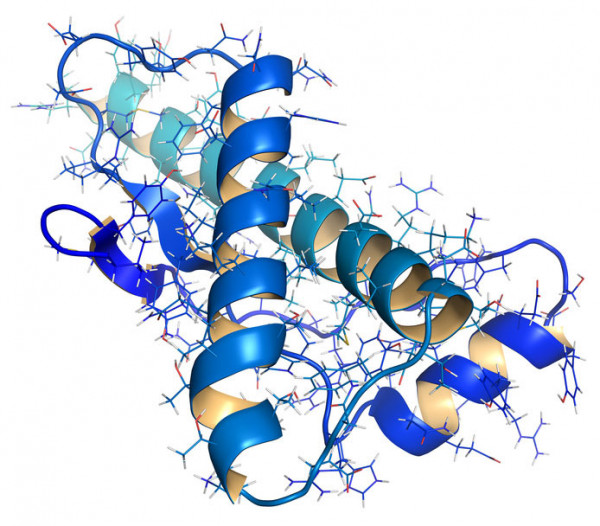 On March 20, 1996, the government of the United Kingdom first announced the possible connection between the bovine spongiform encephalopathy (BSE) and the new variant Creutzfeldt-Jakob disease (nvCJD).

More than a decade after BSE or "mad cow disease" was first reported and after constant assurances from government officials, that beef was safe to eat, announcing the link between BSE and nvCJD became a political scandal of the highest magnitude. Scientifically however things weren't so cut and dry: epidemiological data was at that point flimsy at best and experimental data on mice, establishing the link between BSE and vjCJD, wasn't published untill September 1997.

The Beginning of the Crises

But let us start at the beginning: In 1986 a new cattle disease was formally identified by researchers of the British Ministry of Agriculture. Afflicted cattle showed a progressive and always fatal degeneration of the brain and spinal cord resulting in the eponymous sponge like appearance of the tissue. Over the course of the next 15 years, more than 180,000 cattle, over 95 % of those in the UK, would be diagnosed with BSE. Estimations of the total number of infected cattle reached the millions. The crisis itself was, untill the mid-nineties, confined to the meat industry and measures were taken to contain the epizootic. Cattle were culled and the main route of infection, feeding of meat and bone meal was banned.

A New Variant of the Rare Creutzfeldt-Jakob Disease

In 1995, it was suspected that the crisis was no longer limited to the meat industry. Cases of a new variant of the rare Creutzfeldt-Jakob disease began popping up in Britain. The symptoms and progression rate of nvCJD in humans is almost identical to those of BSE and many feared a large scale epidemic of Creutzfeldt-Jakob disease. In the end these fears proved to be unsubstantiated, instead of hundreds of thousands of cases as in cattle there were less than 300 worldwide in humans.

The Connection Between BSE and CJD

The cause of both diseases is now believed, by a majority of scientists, to be an infectious protein, known as prion. As early as 1960 Tikvah Alper and John Stanley Griffith proposed the existence of infectious agents consisting solely of proteins. Their conclusion was based on a range of observations: The causative agents of livestock diseases like scrapie and chronic wasting disease were radio resistant and couldn't therefore contain nucleic acids. Additionally their data suggested that the infectious particle was much smaller than a virus. Stanley B. Prusiner would continue their approach and in 1982, he announced the discovery of the Prion Protein (PrP). The Prion Protein is expressed in its functional isoform PrPc most in mammalian tissues. PrPc has a mainly alpha helical structure and its physiological function is not yet fully understood but relates to cell-cell adhesion and intracellular signaling in the brain. The infectious isoform PrPSc has a higher proportion of beta sheet structures, is protease resistant and most importantly is able to imprint its own conformation on correctly folded PrPc. This invariably leads to the first slow but exponentially increasing accumulation of amyloid plaques in the afflicted animals' or persons' nerve tissue. The interaction between PrPSc and correctly folded PrPc can occur, albeit rarely, between PrP molecules of different species, allowing for interspecies transmission as demonstrated by the nvCJD cases.

Due to improved quality control and strict regulations regarding the use of bone meal and meat as cattle fodder the number of BSE cases per year has dropped to single digit numbers. The diagnosis and therapy of transmissible spongiforme encephalopathies (TSE) remains however a relevant research topic. The most reliable detection method up to now for PrPSc is post mortem immunohistochemical examination of the brain. This is obviously a bit too late, but new SOFIA (Surround Optical Fiber Immunoassay) based techniques are in development. However, dire consequences still remain for TSE patients, as all therapeutic approaches up to now have proven ineffective.

Tags: Science History, Biomol
Related blog posts
The First Ebola Epidemic
The Discovery of AIDS
The Cure for Scurvy
The First Modern Vaccine
Invention of the Hybridoma Technology
This website uses cookies, which are necessary for the technical operation of the website and are always set. Other cookies, which increase the usability of this website, serve for direct advertising or simplify interaction with other websites and social networks, will only be used with your consent. More information
Decline Accept all Configure