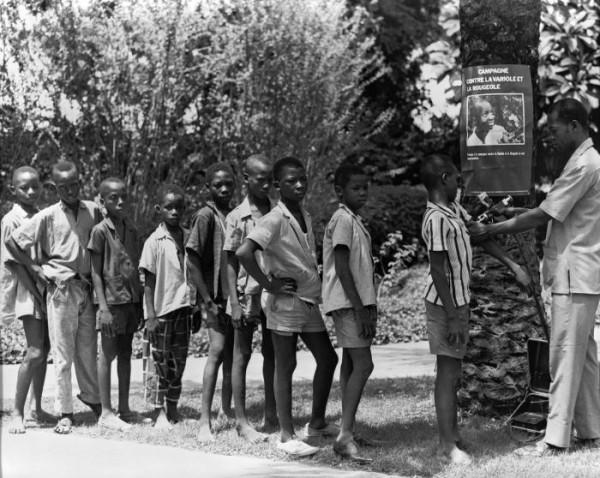 On May 14, 1796, the English physician and scientist Edward Jenner tested the “world’s first vaccine” on the eight-year-old James Phipps.

A Scourge for Mankind

Smallpox is believed to have emerged in human populations during the Neolithic Revolution around 10000 BC but the details of its origin are shrouded in prehistoric mystery. Its deadliest form, Variola major, was caused by the virus Orthopoxvirus variola and reached case fatality rates of up to 90%. The milder form called cottonpox or milkpox was caused by the O. variola subtype alastrim. Smallpox’s high mortality rate and infectiousness as well as the often times disfiguring scars on the faces of the survivors made it one of history's most notorious diseases. Written descriptions of the disease as old as 3100 years are known from ancient China and India, and the characteristic skin lesions are even found on Egyptian mummies. Thousands of years later the disease would aid the Spanish conquistadors in their conquest of the Aztec, Mayan and Inca Empires by killing an estimated 60-95% of the natives in South and Middle America. In 18th century Europe the disease claimed the lives of 400000 annually and smallpox’s twentieth century death toll despite the eradication program is believed to number 300 to 500 million people.

Variolation, the Dangerous Predecessor of Vaccination

It is not surprising that even in antiquity physicians and would-be-physicians as well herb-wives earned part of their living by selling “treatments” for smallpox. Most of these seem ridiculous by our modern standards but not every bit of supposed knowledge was erroneous. By 430 BC the concept of acquired resistance was widely accepted and smallpox survivors were primarily used in nursing smallpox patients. By the tenth century, the Chinese found the first effective method to actively prevent smallpox. Dried and powdered smallpox scabs were blown up the children’s nostrils resulting usually in a mild rash and subsequent immunity to the disease. Similar methods existed in Sudan, India and the Caucasus and are hereafter referred to as variolation. The most successful variolation technique has its origin probably in the Circassian tribes of the Southern Caucasus. Fluid from ripe smallpox postules was inserted in scratches resulting in a usually less severe and seldom fatal smallpox infection. By 1670 the technique was established at the Ottoman Court in Constantinople and by the early 1700s it found its way to Europe and the Americas. Variolation received widespread recognition, it was after all the only truly effective way to prevent smallpox, but by the end of the eighteenth century its many drawbacks became apparent. Contrary to popular assumption, variolation often times failed in inducing lifelong immunity, but the nail in the coffin was the inherent risk associated with the procedure. In addition to its case fatality rate of 2-3%, variolation led to an increasing number of collateral smallpox cases.

By the late 1760s the search for alternatives to variolation had begun. Edward Jenner, an accomplished surgeon and biologist, had heard during his apprenticeship that dairy-maids after having suffered from the harmless cowpox (Vaccinia) were protected from contracting smallpox. He as well as other researchers, among them John Fewster, Peter Plett, and Benjamin Jesty, concluded independently from each other that intentional inoculation with cowpox would have the same effect.  On May 14, 1796 Jenner tested his hypothesis by inoculating the 8-year-old boy James Phipps using matter from the fresh cowpox lesions of the young dairy-maid Sarah Nelms. Phipps developed the typical symptoms of cowpox, mild fever and loss of appetite, but he recovered within a fortnight. In early July Jenner inoculated Phipps with smallpox without any noticeable effect. Jenner concluded that he had induced complete immunity which opened the way for further trials. Jenner was by no means the first who used matter from cowpox lesions in order to achieve protection from smallpox. As early as 1774, the farmer Benjamin Jesty inoculated his wife and two eldest sons, but unlike Jenner he never took the next step of challenging the immunity with smallpox and therefore failed to receive recognition. 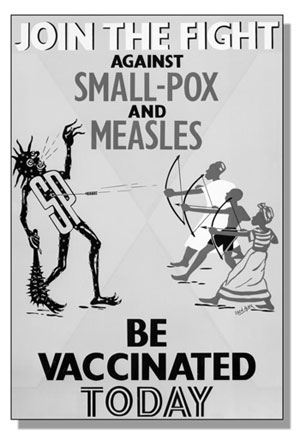 The Eradication of Smallpox

In 1798 Jenner finally published his findings and by the early 1800s the practice of vaccination was accepted and Jenner received funding from Parliament and the Royal Society. The method soon spread through Europe as well as the Spanish and British colonies and by the end of the 19th century vaccination was made compulsory in almost every European country. In the 1950s after implementation of even more rigorous control measures smallpox was eradicated in most parts of the western world and in 1967 the WHO started a global campaign for the worldwide eradication of smallpox. On October 26, 1977 the last naturally occurring case of smallpox was detected in Somalia and on May 8, 1980 the World Health Assembly declared the global eradication of smallpox. Edward Jenner’s work is now said to have ""saved more lives than the work of any other human"" and one is inclined to agree.

Fig 1. This image depicts a number of West African boys standing in a line each awaiting his smallpox and measles vaccinations. The public health technician was using a “Ped-O-Jet®” jet injector in order to administer the vaccines to each recipient. Note the poster, which had been tacked to the tree at the right announcing the Smallpox Eradication and Measles Control Programs that were in full swing at the time of this photograph (1968). Source: CDC/ W.L. DesPrez

Tags: Science History, Biomol
Related blog posts
The First Human Gene Therapy
The Discovery of AIDS
The Cure for Scurvy
Invention of the Hybridoma Technology
The First Therapeutic Use of Penicillin
This website uses cookies, which are necessary for the technical operation of the website and are always set. Other cookies, which increase the usability of this website, serve for direct advertising or simplify interaction with other websites and social networks, will only be used with your consent. More information
Decline Accept all Configure