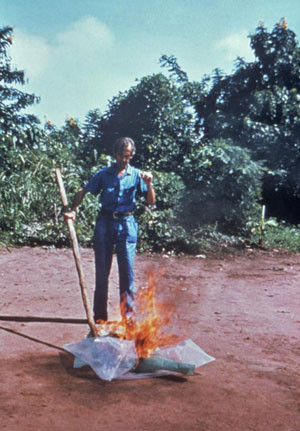 On June 27, 1976 Y.G., a storekeeper at the cotton factory in Nzara, South Sudan, suddenly became ill with a high fever, chest pain, and headache. Two months later, a school headmaster in Yambuku, Democratic Republic of Congo (a village near the Ebola River), sought treatment for similar symptoms. This disease would later be named after the Ebola River.

In December 2013, one-year-old Emile Ouamouno was the first victim of the latest and most widespread Ebola virus disease (EVD) epidemic in history. Over the course of the last two and a half years, 11.325 of the approximately 28.700 suspected cases died, resulting in the disruption and collapse of most medical infrastructure and services in Liberia, Sierra Leone, and Guinea. This in turn led to the suspension of vaccination campaigns and the worst measles outbreaks in years. While the World Health Oranization (WHO) declared Liberia, the last of the three countries most heavily hit by the epidemic, free of active virus transmission on June 9, 2016, this latest disaster gives us cause to recapitulate the story of the first recorded EVD outbreaks 40 years ago.

Nzara, a small township in South Sudan (formerly southern Sudan), is characterized like most settlements in the region by rampant poverty and lack of prospects. Once called the "London of Sudan", it was home to an industrial complex, had running water, stone buildings, and electricity. But now, 60 years after Sudan's independence and 5 years after South Sudan's, all the industrial facilities lie in ruins and most residents live in small wooden huts or tukals made of mud bricks. In 1976, this deterioration already gained a foothold in Nzara with a few facilities closing, mainly due to the lack of colonial subsidies. On June 27, 1976 Y.G., a storekeeper at the cotton factory in Nzara, the biggest employer in the region, suddenly became ill with a high fever, chest pain, and headache. Three days later, he was admitted to the Nzara hospital where his condition deteriorated further, with profuse bleeding from the nose and mouth, as well as bloody diarrhea. Y.G. died of his affliction on July 6, 1976. Y.G.'s brother and a coworker of Y.G. fell ill next, then the coworker's wife. Another employee of the cotton factory, P.G., who worked in a cloth room next to Y.G.'s store room, became sick next. He likely infected two friends of his, the brothers, Samir S. and Sallah S., who spread the disease to the nearby city of Maridi where it ran rampant in the local hospital. This first recorded outbreak of the Ebola virus would claim the lives of 151 of the 284 infected. A WHO task group arrived in the region in response to a request from the Sudanese government in late October. At that time the infection was already petering out and scientists and physicians were mostly relegated to instituting control measures and quarantines, as well as backtracking the course of the epidemic by identifying the contacts of every known victim.

Just two months after the first Ebola patient in Sudan, on August 26, a second, even deadlier outbreak caused by a different variant of the Ebola virus would begin in Yambuku, in the Bumba region of Zaire (now Democratic Republic of Congo). The 44-year-old school headmaster, Mabalo Lokela, sought medical treatment at the Yambuku Mission Hospital  for a fever he, as well as the nurses, attributed to malaria. After receiving chloroquine by parenteral injection his fever resolved, but returned rapidly after September first. His fever flared up again on September 4th, and he was admitted again to the mission hospital, where he died on September 8th. After the subsequent deaths of other patients and nurses from the same mysterious disease, the Zairean government declared the entire Bumba region a quarantine zone and requested international support. Peter Piot, a Belgian junior scientist and part of the WHO response team, discovered after their arrival in Yambuku on October 19, 1976, that the nurses in the mission hospital had inadvertently spread the disease by administering vitamin shots. They had only five glass syringes, which were only boiled once in the morning and just rinsed with sterile water between patients; a recipe for disaster. Thanks to the immediate introduction of quarantine measures, the epidemic spread to only 55 villages and did not reach any major cities. In total, 280 of the 318 infected died in the Zaire outbreak; an almost unprecedented 88% case fatality rate. Peter Piot and his colleagues named the virus after the nearby Ebola (Black) River, a maybe questionable choice as Piot would later explain:

"Actually there's no connection between the hemorrhagic fever and the Ebola River. Indeed, the Ebola River isn't even the closest river to the Yambuku mission. But in our entirely fatigued state, that's what we ended up calling the virus: Ebola."

The health care worker shown here was incinerating materials used in the treatment of Ebola patients at a Yambuku hospital in 1976. Source: CDC/ Dr. Lyle Conrad

Tags: Science History, Biomol
Related blog posts
Creutzfeld Jacob Disease and BSE
The Discovery of AIDS
The First Modern Vaccine
The First Therapeutic Use of Penicillin
Science History
This website uses cookies, which are necessary for the technical operation of the website and are always set. Other cookies, which increase the usability of this website, serve for direct advertising or simplify interaction with other websites and social networks, will only be used with your consent. More information
Decline Accept all Configure