Invention of the Hybridoma Technology 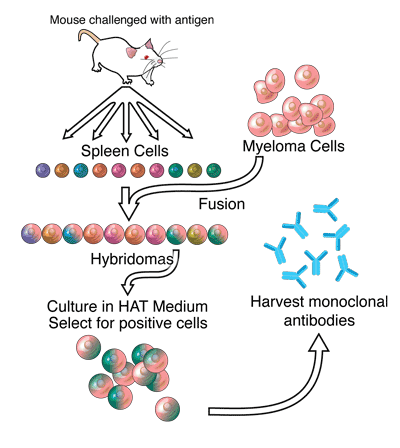 On August 7, 1975, César Milstein and Georges Köhler published their seminal paper on the production of monoclonal antibodies in continuous cell culture. Nine years later, they shared the Nobel Prize in Physiology or Medicine with the Danish scientist Niels K. Jjerne "for (their) theories concerning the specificity in development and control of the immune system and the discovery of the principle for production of monoclonal antibodies".

Childhood and Education in Argentina

César Milstein was born in 1927 in Bahía Blanca, Argentina, to Jewish immigrants. His fascination with natural sciences, especially biochemistry, was sparked at an early age by one of his cousins who was studying the chemistry of snake poisons at the Instituto Malbrán, and Paul de Kruif's book Microbe Hunters. In 1945, he began studying chemistry at the University of Buenos Aires, graduating in 1952. Taking a year off due to political unrest in Argentina under the Peronist government and him being a prime target as president of the student union, he traveled through Europe. He returned to Argentina in 1954 and began working toward earning his Ph.D. under the supervision of Professor Andrés Stoppani.

Cambridge, Back, and There Again

After completing his doctoral in 1957, Milstein joined the laboratory of Malcolm Dixon in Cambridge for a second doctoral study, working with Nobel Prize laureate Frederick Sanger on enzymology. Sanger's work on protein and nucleic acid sequencing would become one of the foundations of Milstein's future scientific exploits. After finishing his second thesis, he became head of the Department of Molecular Biology at the Malbrán Institute for two years, but political turmoil and persecution again prompted Milstein to emmigrate to Europe - this time for good.

Only after his return to Cambridge did Milstein begin working on antibodies. Of particular interest were the mechanisms behind antibody function and diversity. To this end, he spent the first months at the Laboratory of Molecular Biology (LMB) investigating the Bence-Jones protein, a protein complex formed by two antibody light chains, found in the urine of some multiple myeloma patients. At the time, protein sequencing was still tedious work, but Milstein and his students succeeded in elucidating the position and structural function of the disulfide bonds: First in the Bence-Jones protein and later in the subunits of normal antibodies. In the early 1970s, Milstein had changed his focus from the genetic origin of antibody diversity to analyzing the mRNA of antibody secreting tumors. In light of the rather meager results it became apparent that to this end, Milstein's group had to move away from solid tumors and use tissue culture cells. Milstein and his colleague, the pathologist George Brownlee, chose the mouse myeloma cell line, MOPC21, both for its easy growth and high immunoglobulin production.

From Myeloma to Hybridoma

Over the course of the next two to three years, Milstein and his students and postdocs, most notably David Secher and Dick Cotton, established protocols for myeloma cell culturing and cloning that would prove indispensable in the future. Of particular importance was Cotton's discovery that by fusing different myeloma cells, he was able to generate hybrid cells that expressed both sets of antibody subunits.

In 1974, Georges Köhler joined Milstein in Cambridge. He had attended one of Milstein's talks at the University of Basel and had taken an immediate interest in his research. Köhler began his postdoctoral research by looking for V-region mutants of their myeloma. The results were rather disappointing and even in the rare event of finding a V-mutant, there was no practical way of determining its specificity. Cotton's previous experiments, as well as a 1974 publication by J. Schwaber and E. Cohen on fusing human lymphocytes with myeloma cells, now came into play. Milstein and Köhler wondered whether they could create immortal hybrid cells by fusing normal B cells from immunized mice with their myeloma cells. For incidental reasons, they had all the requirements fulfilled and it worked in the first attempt. By cloning individual hybrid cells, they established the first hybridoma cell lines. Their 1975 paper on these experiments has become a citation classic, and in the course of a few years, hundreds of different monoclonal antibodies became available to researchers worldwide.

If you would like more insight into Cesar Milstein's academic career and the advent and early commercialization of the hybridoma technology, we highly recommend a visit to whatisbiotechnology.org's exhibition on César Milstein's life.

Tags: Science History, Antibodies, Biomol
Related blog posts
The First Modern Vaccine
The Discovery of Insulin
Induced Pluripotent Stem Cells
Henrietta Lacks' Immortal Cells
The Discovery of Thermus aquaticus
This website uses cookies, which are necessary for the technical operation of the website and are always set. Other cookies, which increase the usability of this website, serve for direct advertising or simplify interaction with other websites and social networks, will only be used with your consent. More information
Decline Accept all Configure