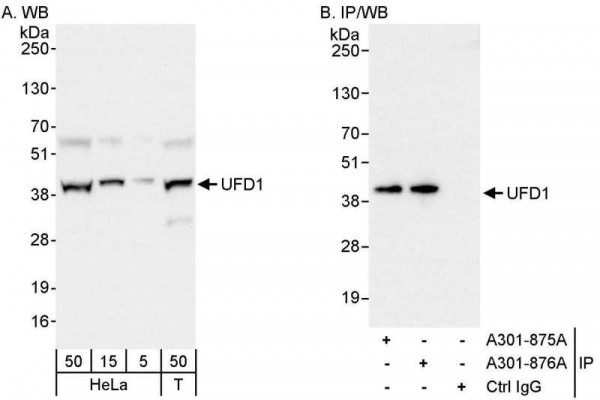 You can also order using info@biomol.com or FAX at 0049-40-85326022
Bigger quantity required? Request Bulk
Description Product Citations Certificate of Analysis Reviews 0
Description
Protein function: Essential component of the ubiquitin-dependent proteolytic pathway which... more
Close menu
Product information "Anti-UFD1"
Protein function: Essential component of the ubiquitin-dependent proteolytic pathway which degrades ubiquitin fusion proteins. The ternary complex containing UFD1, VCP and NPLOC4 binds ubiquitinated proteins and is necessary for the export of misfolded proteins from the ER to the cytoplasm, where they are degraded by the proteasome. The NPLOC4-UFD1-VCP complex regulates spindle disassembly at the end of mitosis and is necessary for the formation of a closed nuclear envelope. It may be involved in the development of some ectoderm-derived structures. Acts as a negative regulator of type I interferon production via the complex formed with VCP and NPLOC4, which binds to DDX58/RIG-I and recruits RNF125 to promote ubiquitination and degradation of DDX58/RIG-I (PubMed:26471729). [The UniProt Consortium]

Caution
Our products are for laboratory research use only: Not for administration to humans!
Product Citations
Information about the product reference will follow. more
Close menu
Certificate of Analysis
You will get a certificate here
Go back
Log in or register to request a certificate of analysis.
Reviews 0
Read, write and discuss reviews... more
Close menu
Customer review for "Anti-UFD1"
Write a review
Log in or register to review a product.
Similar products
Similar products

Anti-UFD1L
314.00€ *
Viewed
This website uses cookies, which are necessary for the technical operation of the website and are always set. Other cookies, which increase the usability of this website, serve for direct advertising or simplify interaction with other websites and social networks, will only be used with your consent. More information
Decline Accept all Configure