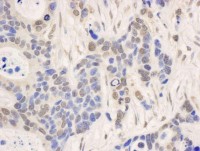 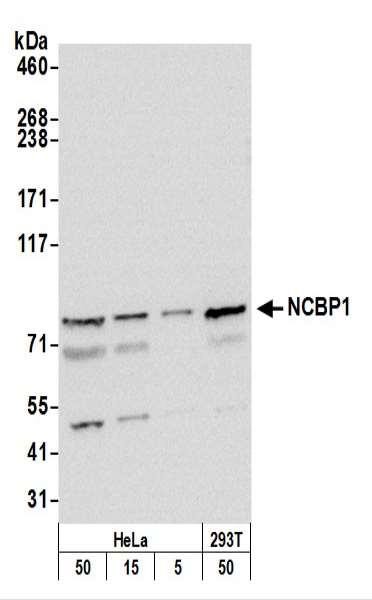 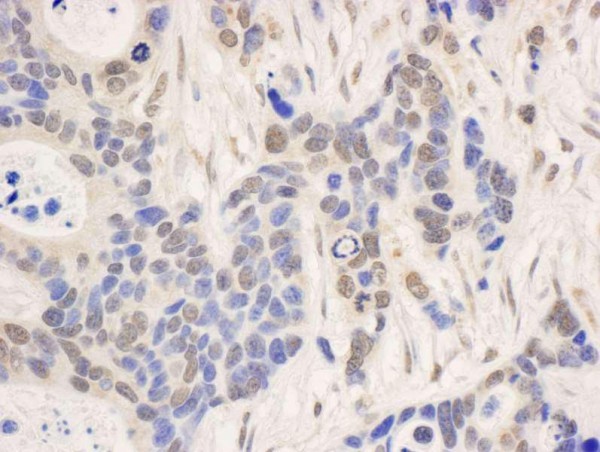 You can also order using info@biomol.com or FAX at 0049-40-85326022
Bigger quantity required? Request Bulk
Description Certificate of Analysis Reviews 0
Description
Protein function: Component of the cap-binding complex (CBC), which binds cotranscriptionally to... more
Close menu
Product information "Anti-NCBP1/CBP80"
Protein function: Component of the cap-binding complex (CBC), which binds cotranscriptionally to the 5'-cap of pre-mRNAs and is involved in various processes such as pre-mRNA splicing, translation regulation, nonsense-mediated mRNA decay, RNA-mediated gene silencing (RNAi) by microRNAs (miRNAs) and mRNA export. The CBC complex is involved in mRNA export from the nucleus via its interaction with ALYREF/THOC4/ALY, leading to the recruitment of the mRNA export machinery to the 5'-end of mRNA and to mRNA export in a 5' to 3' direction through the nuclear pore. The CBC complex is also involved in mediating U snRNA and intronless mRNAs export from the nucleus. The CBC complex is essential for a pioneer round of mRNA translation, before steady state translation when the CBC complex is replaced by cytoplasmic cap-binding protein eIF4E. The pioneer round of mRNA translation mediated by the CBC complex plays a central role in nonsense-mediated mRNA decay (NMD), NMD only taking place in mRNAs bound to the CBC complex, but not on eIF4E-bound mRNAs. The CBC complex enhances NMD in mRNAs containing at least one exon-junction complex (EJC) via its interaction with UPF1, promoting the interaction between UPF1 and UPF2. The CBC complex is also involved in 'failsafe' NMD, which is independent of the EJC complex, while it does not participate in Staufen-mediated mRNA decay (SMD). During cell proliferation, the CBC complex is also involved in microRNAs (miRNAs) biogenesis via its interaction with SRRT/ARS2 and is required for miRNA-mediated RNA interference. The CBC complex also acts as a negative regulator of PARN, thereby acting as an inhibitor of mRNA deadenylation. In the CBC complex, NCBP1/CBP80 does not bind directly capped RNAs (m7GpppG-capped RNA) but is required to stabilize the movement of the N-terminal loop of NCBP2/CBP20 and lock the CBC into a high affinity cap-binding state with the cap structure. Associates with NCBP3 to form an alternative cap- binding complex (CBC) which plays a key role in mRNA export and is particularly important in cellular stress situations such as virus infections. The conventional CBC with NCBP2 binds both small nuclear RNA (snRNA) and messenger (mRNA) and is involved in their export from the nucleus whereas the alternative CBC with NCBP3 does not bind snRNA and associates only with mRNA thereby playing a role only in mRNA export. NCBP1/CBP80 is required for cell growth and viability (PubMed:26382858). [The UniProt Consortium]

Caution
Our products are for laboratory research use only: Not for administration to humans!
Certificate of Analysis
You will get a certificate here
Go back
Log in or register to request a certificate of analysis.
Reviews 0
Read, write and discuss reviews... more
Close menu
Customer review for "Anti-NCBP1/CBP80"
Write a review
Log in or register to review a product.
Similar products
Similar products 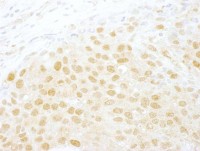