You can also order using info@biomol.com or FAX at 0049-40-85326022
Bigger quantity required? Request Bulk
Description Certificate of Analysis Reviews 0
Description
0.2 mg/ml in 1X PBS with 0.1 mg/ml BSA (US sourced) and 0.05% sodium azide. It recognizes a... more
Close menu
Product information "Anti-Gamma Catenin / Plakoglobin, clone 11E4."
0.2 mg/ml in 1X PBS with 0.1 mg/ml BSA (US sourced) and 0.05% sodium azide. It recognizes a protein of 80-87kDa, identified as gamma-Catenin or Plakoglobin. The catenins (alpha, beta, gamma and delta) are ubiquitously expressed, cytoplasmic proteins that associate with E-cadherin at cellular junctions. Catenin/cadherin complexes play an important role in mediating cellular adhesion. alpha T-catenin, also referred to as VR22, is a 895-amino acid protein that is most abundantly expressed in cardio-myocytes and in the peritubular myoid cells of the testis. alpha T-catenin binds to alpha E-catenin as well as to beta-catenin, and it functions to inhibit Wnt signaling. CTNNA3, the gene that encodes for alpha-T-catenin, is located on chromosome 10, and mutations in this gene show a strong correlation to late-onset Alzheimer s disease (LOAD) as well as to dilated cardiomyopathy. Protein function: Common junctional plaque protein. The membrane- associated plaques are architectural elements in an important strategic position to influence the arrangement and function of both the cytoskeleton and the cells within the tissue. The presence of plakoglobin in both the desmosomes and in the intermediate junctions suggests that it plays a central role in the structure and function of submembranous plaques. Acts as a substrate for VE-PTP and is required by it to stimulate VE- cadherin function in endothelial cells. Can replace beta-catenin in E-cadherin/catenin adhesion complexes which are proposed to couple cadherins to the actin cytoskeleton. [The UniProt Consortium]

Caution
Our products are for laboratory research use only: Not for administration to humans!
Certificate of Analysis
You will get a certificate here
Go back
Log in or register to request a certificate of analysis.
Reviews 0
Read, write and discuss reviews... more
Close menu
Customer review for "Anti-Gamma Catenin / Plakoglobin, clone 11E4."
Write a review
Log in or register to review a product.
Similar products
Similar products
+ FREE T-Shirt 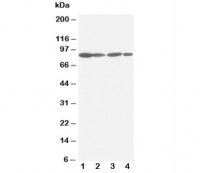 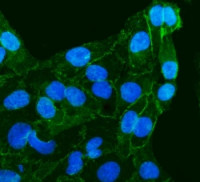 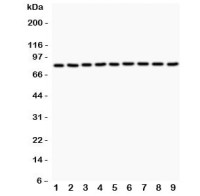 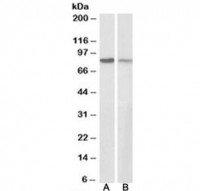 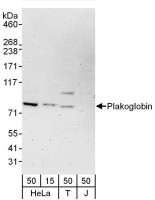 Plakoglobin Antibody AbVantage(TM) Pack
617.00€ *
Viewed
This website uses cookies, which are necessary for the technical operation of the website and are always set. Other cookies, which increase the usability of this website, serve for direct advertising or simplify interaction with other websites and social networks, will only be used with your consent. More information
Decline Accept all Configure