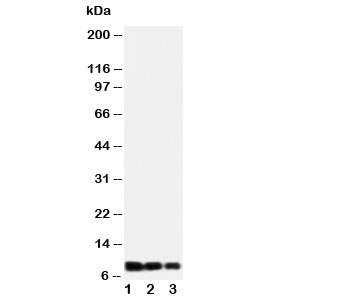 You can also order using info@biomol.com or FAX at 0049-40-85326022
Bigger quantity required? Request Bulk
Description Product Citations Certificate of Analysis Reviews 0
Description
0.5mg/ml if reconstituted with 0.2ml sterile DI water. Interleukin-8(IL-8) is a chemokine... more
Close menu
Product information "Anti-IL-8"
0.5mg/ml if reconstituted with 0.2ml sterile DI water. Interleukin-8(IL-8) is a chemokine produced by macrophages and other cell types such as epithelial cells. It is also synthesized by endothelial cells, which store IL-8 in their storage vesicles, the Weibel-Palade bodies. In humans, the interleukin-8 protein is encoded by the IL8 gene. Interleukin-8(IL8) is a member of the CXC chemokine family(Hull et al., 2001). IL-8 is believed to play a role in the pathogenesis of bronchiolitis, a common respiratory tract disease caused by viral infection. This gene and other ten members of the CXC chemokine gene family form a chemokine gene cluster in a region mapped to chromosome 4q. The genes for IL8 have been co-localized on a 335-kb genomic fragment. Protein function: IL-8 is a chemotactic factor that attracts neutrophils, basophils, and T-cells, but not monocytes. It is also involved in neutrophil activation. It is released from several cell types in response to an inflammatory stimulus. IL-8(6-77) has a 5-10-fold higher activity on neutrophil activation, IL-8(5-77) has increased activity on neutrophil activation and IL-8(7-77) has a higher affinity to receptors CXCR1 and CXCR2 as compared to IL-8(1-77), respectively. [The UniProt Consortium]

Caution
Our products are for laboratory research use only: Not for administration to humans!
Product Citations
Information about the product reference will follow. more
Close menu
Certificate of Analysis
You will get a certificate here
Go back
Log in or register to request a certificate of analysis.
Reviews 0
Read, write and discuss reviews... more
Close menu
Customer review for "Anti-IL-8"
Write a review
Log in or register to review a product.
Similar products
Similar products 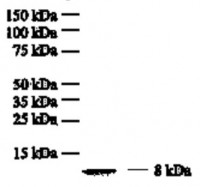 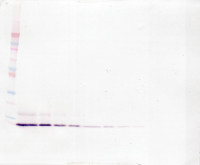 Anti-IL8 (Biotin)
542.00€ *
Viewed
This website uses cookies, which are necessary for the technical operation of the website and are always set. Other cookies, which increase the usability of this website, serve for direct advertising or simplify interaction with other websites and social networks, will only be used with your consent. More information
Decline Accept all Configure