You can also order using info@biomol.com or FAX at 0049-40-85326022
Bigger quantity required? Request Bulk
Description Product Citations Certificate of Analysis Reviews 0
Description
The protein CATB is a lysosomal cysteine proteinase composed of a dimer of disulfide-linked heavy... more
Close menu
Product information "Anti-Cathepsin B, ID (CATB, Cathepsin B1, APP Secretase, APPS, Cathepsin B Light Chain, Cathepsin B"
The protein CATB is a lysosomal cysteine proteinase composed of a dimer of disulfide-linked heavy and light chains, both produced from a single protein precursor. It is also known as amyloid precursor protein secretase and is involved in the proteolytic processing of amyloid precursor protein (APP). Incomplete proteolytic processing of APP has been suggested to be a causative factor in Alzheimer disease, the most common cause of dementia. Overexpression of the protein, which is a member of the peptidase C1 family, has been associated with esophageal adenocarcinoma and other tumors. Applications: Suitable for use in FLISA, Western Blot, and Immunohistochemistry. Other applications not tested. Recommended Dilution: FLISA: 1:1,000, Western Blot: 1:100-1:500, Immunohistochemistry: 1:50-1:100, Optimal dilutions to be determined by the researcher. Storage and Stability: May be stored at 4°C before opening. DO NOT FREEZE! Stable at 4°C as an undiluted liquid. Dilute only prior to immediate use. Stable for 12 months after receipt at 4°C. Freezing R-Phycoerythrin (PE) conjugates will result in a substantial loss of activity. PE conjugates are sensitive to light., , Note: Applications are based on unconjugated antibody.

Caution
Our products are for laboratory research use only: Not for administration to humans!
Product Citations
Information about the product reference will follow. more
Close menu
Certificate of Analysis
You will get a certificate here
Go back
Log in or register to request a certificate of analysis.
Reviews 0
Read, write and discuss reviews... more
Close menu
Customer review for "Anti-Cathepsin B, ID (CATB, Cathepsin B1, APP Secretase, APPS, Cathepsin B Light Chain, Cathepsin B"
Write a review
Log in or register to review a product.
Similar products
Similar products 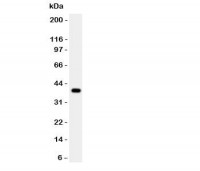 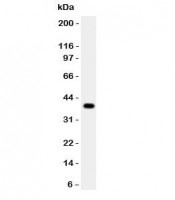 Anti-Cathepsin B
439.00€ *
Viewed
This website uses cookies, which are necessary for the technical operation of the website and are always set. Other cookies, which increase the usability of this website, serve for direct advertising or simplify interaction with other websites and social networks, will only be used with your consent. More information
Decline Accept all Configure