You can also order using info@biomol.com or FAX at +49-40-85326022
Larger quantity required? Request bulk
Description Product Citations Certificate of Analysis Reviews 0
Description
Alpha-fetoprotein (AFP) is a serum glycoprotein protein produced in the liver or yolk sac of... more
Close menu
Product information "Anti-AFP (Alpha-fetoprotein, Alpha-1-fetoprotein, Alpha-fetoglobulin, HPAFP)"
Alpha-fetoprotein (AFP) is a serum glycoprotein protein produced in the liver or yolk sac of fetal staged mammals. AFP synthesis is minimal after birth and trace amount is expressed in the adult liver. AFP gene expression is regulated by the interactions between steroid hormone receptors and transcriptional factors in separate signal transduction pathways. AFP functions as a binding and transporting ligand and cell growth regulator. An elevated expression level of AFP has been implicated in colorectal, ovarian, pancreatic, testicular, and certain liver cancers. High level of AFP is also seen some diseases, such as hepatitis and colitis. AFP is used as a screening marker for fetal abnormalities in pregnant women, such as Down syndrome. Recently, AFP has been introduced as an anti-cancer drug-ligand carrier, transporting drugs to target tumor cells, increasing anti-tumor efficiency. Applications: Suitable for use in Western Blot and Immunoprecipitation. Other applications not tested. Recommended Dilution: Optimal dilutions to be determined by the researcher. AA Sequence: MKWVESIFLIFLLNFTESRTLHRNEYGIASILDSYQCTAEISLADLATIFFAQFVQEATYKEVSKMVKDALTAIEKPTGDEQSSGCLENQLPAFLEELCHEKEILEKYGHSDCCSQSEEGRHNCFLAHKKPTPASIPLFQVPEPVTSCEAYEEDRETFMNKFIYEIARRHPFLYAPTILLWAARYDKIIPSCCKAENAVECFQTKAATVTKELRESSLLNQHACAVMKNFGTRTFQAITVTKLSQKFTKVNFTEIQKLVLDVAHVHEHCCRGDVLDCLQDGEKIMSYICSQQDTLSNKITECCKLTTLERGQCIIHAENDEKPEGLSPNLNRFLGDRDFNQFSSGEKNIFLASFVHEYSRRHPQLAVSVILRVAKGYQELLEKCFQTENPLECQDKGEEELQKYIQESQALAKRSCGLFQKLGEYYLQNAFLVAYTKKAPQLTSSELMAITRKMAATAATCCQLSEDKLLACGEGAADIIIGHLCIRHEMTPVNPGVGQCCTSSYANRRPCFSSLVVDETYVPPAFSDDKFIFHKDLCQAQGVALQTMKQEFLINLVKQKPQITEEQLEAVIADFSGLLEKCCQGQEQEVCFAEEGQKLISKTRAALGV, Storage and Stability: May be stored at 4°C for short-term only. Aliquot to avoid repeated freezing and thawing. Store at -20°C. Aliquots are stable for at least 12 months. For maximum recovery of product, centrifuge the original vial after thawing and prior to removing the cap.

Caution
Our products are for laboratory research use only: Not for administration to humans!
Product Citations
Information about the product reference will follow. more
Close menu
Certificate of Analysis
You will get a certificate here
Go back
Log in or register to request a certificate of analysis.
Reviews 0
Read, write and discuss reviews... more
Close menu
Customer review for "Anti-AFP (Alpha-fetoprotein, Alpha-1-fetoprotein, Alpha-fetoglobulin, HPAFP)"
Write a review
Log in or register to review a product.
Similar products
Similar products 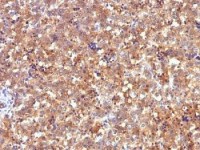 Anti-alpha Fetoprotein (Biotin)
521.00€ *
Viewed
This website uses cookies, which are necessary for the technical operation of the website and are always set. Other cookies, which increase the usability of this website, serve for direct advertising or simplify interaction with other websites and social networks, will only be used with your consent. More information
Decline Accept all Configure