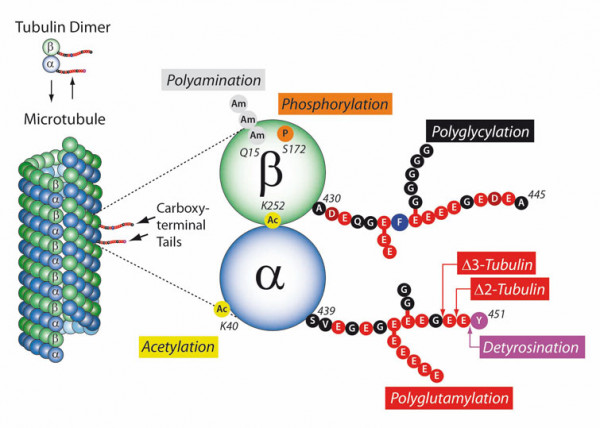 PTMs are highly dynamic and often reversible processes where protein functional properties are altered by the addition of a chemical group or another protein to its amino acid residues. As key cytoskeletal proteins with roles in neuronal development, growth, motility, and intracellular trafficking, tubulins and microtubules (MTs) are major substrates for PTMs. They include tyrosination/detyrosination, α2-tubulin formation, acetylation, phosphorylation, polyamination, ubiquitination, polyglutamylation, and glycylation. Most of these PTMs preferentially take place on tubulin subunits already incorporated into MTs.

The Role of PTMs Is Diverse:

MT PTMs generate a "tubulin code" that influences the biological function of the MT cytoskeleton. The readout of this code can be through modulation of higher-order MT structures and/or preferential interactions with selected MT-interacting proteins (MAPs, motors). MTs are involved in biological processes in virtually every cell, tissue, and organ in the body, and MT disturbances underlie many diseases such as Alzheimer's and Parkinson's as well as cancer. 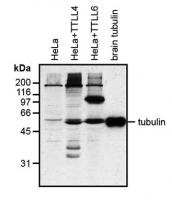 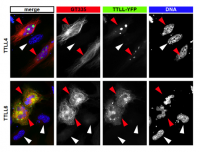 Anti-Polyglutamate chain [Poly-E]
385.00€ *
This website uses cookies, which are necessary for the technical operation of the website and are always set. Other cookies, which increase the usability of this website, serve for direct advertising or simplify interaction with other websites and social networks, will only be used with your consent. More information
Decline Accept all Configure