Cookie preferences
This website uses cookies, which are necessary for the technical operation of the website and are always set. Other cookies, which increase the comfort when using this website, are used for direct advertising or to facilitate interaction with other websites and social networks, are only set with your consent.
Configuration
Technically required
These cookies are necessary for the basic functions of the shop.
Allow all cookies
CSRF token
Cookie preferences
Currency change
Customer-specific caching
Decline all cookies
FACT-Finder tracking
Individual prices
Selected shop
Session
Comfort functions
These cookies are used to make the shopping experience even more appealing, for example for the recognition of the visitor.
Note
Statistics & Tracking
Affiliate program
Conversion and usertracking via Google Tag Manager
Track device being used
Categories
Information 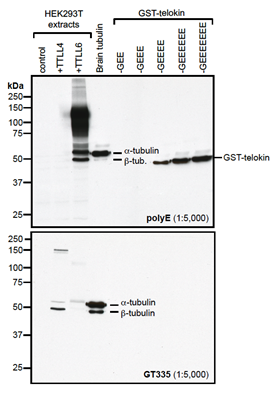 You can also order using info@biomol.com or FAX at 0049-40-85326022
Bigger quantity required? Request Bulk
Description Certificate of Analysis Reviews 0
Description
Tubulin polyglutamylation stimulates spastin-mediated microtubule severing. Microtubules are key... more
Close menu
Product information "Anti-Polyglutamate chain [Poly-E]"
Tubulin polyglutamylation stimulates spastin-mediated microtubule severing. Microtubules are key elements of the eukaryotic cytoskeleton that dynamically assemble from heterodimers of alpha- and beta-tubulin. Two different mechanisms can generate microtubule diversity: the expression of different alpha- and beta-tubulin genes, referred to as tubulin isotypes, and the generation of posttranslational modifications (PTMs) on alpha- and beta-tubulin. Tubulin PTMs include the well-known acetylation or phosphorylation, and others that have so far mostly been found on tubulin, detyrosination/tyrosination, polyglutamylation and polyglycylation. These PTMs might have evolved to specifically regulate tubulin and microtubule functions. Polyglutamylation is a PTM that occurs when secondary glutamate side chains are formed on gamma-carboxyl groups of glutamate residues in a protein. Enzymes catalyzing polyglutamylation belong to the TTL-like (TTLL, Tubulin tyrosine ligase-like) family of glutamylases. Deglutamylases, the enzymes that reverse polyglutamylation, were identified within a novel family of CCPs (cytosolic carboxypeptidase). Subtle differences in polyglutamylation can be seen on diverse microtubules in different cell types. The functions of these modifications remain to be studied. However, its wide distribution strengthens the idea that it could be involved in fine-tuning a range of microtubule functions.

Caution
Our products are for laboratory research use only: Not for administration to humans!
Certificate of Analysis
You will get a certificate here
Go back
Log in or register to request a certificate of analysis.
Reviews 0
Read, write and discuss reviews... more
Close menu
Customer review for "Anti-Polyglutamate chain [Poly-E]"
Write a review
Log in or register to review a product.
Viewed
This website uses cookies, which are necessary for the technical operation of the website and are always set. Other cookies, which increase the usability of this website, serve for direct advertising or simplify interaction with other websites and social networks, will only be used with your consent. More information
Decline Accept all Configure