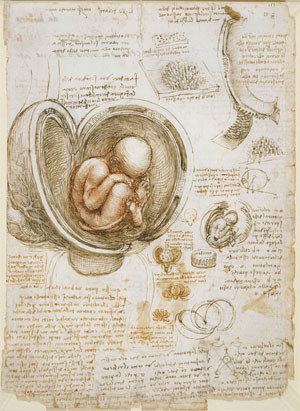 On August 25, 2006 Cell published Kazutoshi Takahashi and Shinya Yamanaka's work on the induction of pluripotency in embryonic and adult fibroblasts. While the technology has not yet achieved therapeutic application it has however left a mark in the pharmaceutics industry and many research laboratories.

The history of developmental biology and consequently that of stem cell research has been and still is ripe with controversy. Up until the late middle ages human dissection was either prohibited or at least discouraged by religious or moral zeal and while anatomy classes became more and more common in the universities around Europe - the first recorded public dissection in Christian Europe took place around 1315 - the social stigma receded only slowly. Physicians depended for the most part on the often wildly inaccurate descriptions in the works of ancient writers like Galen or Celsus. As a result, almost nothing was known about the developmental stages and physiological processes during pregnancy or about the particularities of human anatomy in general. Leonardo da Vinci was on of the first to make a scientific drawing of a fetus in utero, thirteen centuries after the death of Galen (see figure).

The points of controversy around embryology have, as can be expected, shifted in the last 700 years: from a general taboo on the ""desecration"" of the human body, to the question of when we consider human life to begin and what protection we concede to this early life? However, the overarching theme of the debate, namely human dignity and the sanctity of human life versus the gratification of curiosity and the advantages of scientific progress, has not changed at all. At the current state of technology, the creation of a human embryonic stem cell line requires the destruction of a human embryo. As a result an entire branch of life science research is called into question or downright illegal in many countries. And while lawmakers, ethics committees, scientists and the public argue, these basic questions still remain unresolved and a generally accepted compromise is, quite frankly, not in sight.

The Long Road to Pluripotency

The protagonists of this Science History chapter made probably the biggest step in the alleviation of these arguments by developing a technique for the reprogramming of differentiated somatic cells into pluripotent cells with stem cell like qualities. Shinya Yamanaka started his academic career as a student at the Kobe University School of Medicine, worked shortly as an orthopedic surgeon in Osaka and after noticing his lack of talent (his own words) and the inadequacy of the treatment of many diseases he returned to Kobe to start working in basic medical research. After his Ph. D. thesis on the role of platelet activating factor (PAF) and thromboxane A2 in blood pressure regulation, Yamanaka applied to Gladstone Institute of Cardiovascular Disease, San Francisco, to learn the new knockout mice technology.

In the course of his research on APOBEC1 induced carcinogenesis at that institute he discovered a novel target of APOBEC1, fittingly named Novel APOBEC1 Target #1 (NAT1). While unsuccessfully trying to obtain NAT1-/- mice, Yamanaka found NAT1 to be essential for the maintenance of pluripotency in mouse embryonic stem (ES) cells. Around that time,  J. Thomson published his landmark paper on the generation of human ES cells and in the roar around this landmark discovery and its implications on regenerative medicine, Yamanaka decided to reorient his scientific interest again. He got a position as assistant professor at the Nara Institute of Science and Technology (NAIST) and began fully working on embryonic stem cells. Confronted with the illegality of research on human ES cells in Japan and the strong effort of other groups on directing the differentiation of stem cells to specific tissue cells, Yamanaka decided to pursue the opposite approach: generating pluripotent cells from differentiated somatic cells. Previous experiments had shown that this was indeed possible by fusion of somatic and ES cells, suggesting that ES cells express pluripotency inducing factors. Yamanaka and his graduate students spent the next years identifying proteins, that are highly and specifically expressed in mouse embryonic stem cells. They identified Fbox15 as one of the ES cell associated transcripts (ECATs), which provided the group with a valuable assay system. Despite being only expressed in the early embryo, its knockout had no apparent phenotype and the cells differentiated normally. They inserted the neomycin resistance gene in the Fbox15 locus, meaning that only ES or ES-like cells could survive high concentrations of the antibiotic G418. They then proceeded to perform retroviral transduction with the 24 most promising ECATs on their Fbox-/- mouse embryonic fibroblasts (MEFs). No single gene was able to induce pluripotency on its own but after using all 24 genes Yamanaka and his graduate student Kazutoshi Takahashi finally saw colonies resistant to G418 and physiologically similar to mouse ES cells. Withdrawing individual factors they reduced the number of necessary transcription factors to four: Oct3/4, Sox2, c-Myc and Klf. These induced pluripotent stem (iPS) cells behave in many ways, most importantly in term of their pluripotency, like normal ES cells. Takahashi and Yamanaka published their groundbreaking results on August 25, 2006 and Shinya Yamanaka was awarded the 2012 Nobel Prize in Physiology and Medicine in honor of this discovery.

Present and Future Applications (of iPSCs)

The technology of reprogramming somatic cells into ES-like pluripotent cells first invented by Takahashi and Yamanaka is revolutionary for multiple reasons. It alleviates at least in part the need for embryonic stem cells and thereby the necessity of destroying embryos. These pluripotent cell lines can then be differentiated into any tissue of choice, providing a far superior assay system for drug testing, which was previously done on various cancer cell lines. In addition it allows for the generation of patient specific stem cells, in principle allowing for stem cell therapy without the risk of host-graft reactions. Induced pluripotent stem cells are however not quite ready for therapeutic applications and many leading scientists believe that this will stay this way for at least the next few years. The main reason is their propensity to form tumors. This is in part due to the necessity of transducing the somatic cells with oncogenes like c-Myc to generate iPSCs in the first place. Alternative approaches do not yet achieve the high reprogramming efficiency necessary for therapeutic applications, but we are confident that science will eventually find a way.

Depiction of the Fetus in the Womb by Leonardo da Vinci, created between 1510 and 1513.

Tags: Science History, Biomol
Related blog posts
Henrietta Lacks' Immortal Cells
The Discovery of DNA Polymerase
Invention of the Hybridoma Technology
The First Human Gene Therapy
The Development of the Periodic Table of Elements
This website uses cookies, which are necessary for the technical operation of the website and are always set. Other cookies, which increase the usability of this website, serve for direct advertising or simplify interaction with other websites and social networks, will only be used with your consent. More information
Decline Accept all Configure