You can also order using info@biomol.com or FAX at 0049-40-85326022
Bigger quantity required? Request Bulk
Description Certificate of Analysis Reviews 0
Description
0.2 mg/ml with 0.1 mg/ml BSA (US sourced), 0.05% sodium azide. Recognizes a cluster of proteins... more
Close menu
Product information "Anti-Tyrosinase Cocktail, clone T311 + OCA1/812"
0.2 mg/ml with 0.1 mg/ml BSA (US sourced), 0.05% sodium azide. Recognizes a cluster of proteins between 70-80kDa, identified as Tyrosinase/TYR. Occasionally a minor band at 55kDa is also detected. This mAb shows no cross-reaction with MAGE-1 and tyrosinase-related protein 1, TRP-1/gp75. Tyrosinase is a copper-containing metalloglycoprotein that catalyzes several steps in the melanin pigment biosynthetic pathway, the hydroxylation of tyrosine to L-3,4-dihydroxy-phenylalanine (dopa), and the subsequent oxidation of dopa to dopaquinone. Mutations of the tyrosinase gene occur in various forms of albinism. Tyrosinase is one of the targets for cytotoxic T-cell recognition in melanoma patients. Staining of melanomas with this mAb shows tyrosinase in melanotic as well as amelanotic variants. This mAb is a useful marker for melanocytes and melanomas. Protein function: This is a copper-containing oxidase that functions in the formation of pigments such as melanins and other polyphenolic compounds. Catalyzes the rate-limiting conversions of tyrosine to DOPA, DOPA to DOPA-quinone and possibly 5,6-dihydroxyindole to indole-5,6 quinone. [The UniProt Consortium]

Caution
Our products are for laboratory research use only: Not for administration to humans!
Certificate of Analysis
You will get a certificate here
Go back
Log in or register to request a certificate of analysis.
Reviews 0
Read, write and discuss reviews... more
Close menu
Customer review for "Anti-Tyrosinase Cocktail, clone T311 + OCA1/812"
Write a review
Log in or register to review a product.
Similar products
Similar products 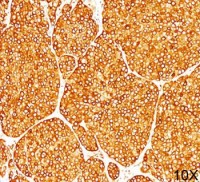 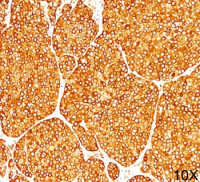 Anti-Tyrosinase, clone T311
439.00€ *
Viewed
This website uses cookies, which are necessary for the technical operation of the website and are always set. Other cookies, which increase the usability of this website, serve for direct advertising or simplify interaction with other websites and social networks, will only be used with your consent. More information
Decline Accept all Configure