You can also order using info@biomol.com or FAX at 0049-40-85326022
Bigger quantity required? Request Bulk
Description Certificate of Analysis Reviews 0
Description
0.2 mg/ml with 0.1 mg/ml BSA (US sourced), 0.05% sodium azide. Recognizes a 14kDa protein,... more
Close menu
Product information "Anti-S100A9, clone S100A9/1011"
0.2 mg/ml with 0.1 mg/ml BSA (US sourced), 0.05% sodium azide. Recognizes a 14kDa protein, identified as S100A9 (also known as Calgranulin B or MRP14), expressed by granulocytes, monocytes and by tissue macrophages. The protein encoded by this gene is a member of the S100 family of proteins containing 2 EF-hand calcium-binding motifs. S100 proteins are localized in the cytoplasm and/or nucleus of a wide range of cells, and involved in the regulation of a number of cellular processes such as cell cycle progression and differentiation. Altered expression of this protein is associated with the disease cystic fibrosis. This mAb reacts with neutrophils, monocytes and macrophages, and has been shown as an important marker for identifying macrophages in tissue sections. Among cells that are now recognized as macrophages are histiocytes, Kupffer cells, osteoclasts, microglial cells, synovial type A cells, interdigitating cells, and Langerhans cells (in normal tissues) and epithelioid cells and Langerhans-type and foreign-body-type multinucleated giant cells (in inflamed tissues). Protein function: S100A9 is a calcium- and zinc-binding protein which plays a prominent role in the regulation of inflammatory processes and immune response. It can induce neutrophil chemotaxis, adhesion, can increase the bactericidal activity of neutrophils by promoting phagocytosis via activation of SYK, PI3K/AKT, and ERK1/2 and can induce degranulation of neutrophils by a MAPK-dependent mechanism. Predominantly found as calprotectin (S100A8/A9) which has a wide plethora of intra- and extracellular functions. The intracellular functions include: facilitating leukocyte arachidonic acid trafficking and metabolism, modulation of the tubulin-dependent cytoskeleton during migration of phagocytes and activation of the neutrophilic NADPH-oxidase. Activates NADPH- oxidase by facilitating the enzyme complex assembly at the cell membrane, transferring arachidonic acid, an essential cofactor, to the enzyme complex and S100A8 contributes to the enzyme assembly by directly binding to NCF2/P67PHOX. The extracellular functions involve proinfammatory, antimicrobial, oxidant-scavenging and apoptosis-inducing activities. Its proinflammatory activity includes recruitment of leukocytes, promotion of cytokine and chemokine production, and regulation of leukocyte adhesion and migration. Acts as an alarmin or a danger associated molecular pattern (DAMP) molecule and stimulates innate immune cells via binding to pattern recognition receptors such as Toll-like receptor 4 (TLR4) and receptor for advanced glycation endproducts (AGER). Binding to TLR4 and AGER activates the MAP-kinase and NF- kappa-B signaling pathways resulting in the amplification of the proinflammatory cascade. Has antimicrobial activity towards bacteria and fungi and exerts its antimicrobial activity probably via chelation of Zn(2+) which is essential for microbial growth. Can induce cell death via autophagy and apoptosis and this occurs through the cross-talk of mitochondria and lysosomes via reactive oxygen species (ROS) and the process involves BNIP3. Can regulate neutrophil number and apoptosis by an anti-apoptotic effect, regulates cell survival via ITGAM/ITGB and TLR4 and a signaling mechanism involving MEK-ERK. Its role as an oxidant scavenger has a protective role in preventing exaggerated tissue damage by scavenging oxidants. Can act as a potent amplifier of inflammation in autoimmunity as well as in cancer development and tumor spread. Has transnitrosylase activity, in oxidatively-modified low- densitity lipoprotein (LDL(ox))-induced S-nitrosylation of GAPDH on 'Cys-247' proposed to transfer the NO moiety from NOS2/iNOS to GAPDH via its own S-nitrosylated Cys-3. The iNOS-S100A8/A9 transnitrosylase complex is proposed to also direct selective inflammatory stimulus-dependent S-nitrosylation of multiple targets such as ANXA5, EZR, MSN and VIM by recognizing a [IL]-x-C- x-x-[DE] motif. [The UniProt Consortium] 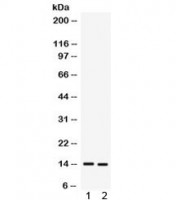 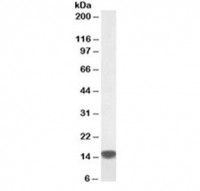 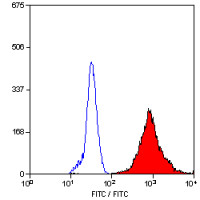 Anti-Macrophages (Monocytes) (APC)
615.00€ *
Viewed
This website uses cookies, which are necessary for the technical operation of the website and are always set. Other cookies, which increase the usability of this website, serve for direct advertising or simplify interaction with other websites and social networks, will only be used with your consent. More information
Decline Accept all Configure