You can also order using info@biomol.com or FAX at +49-40-85326022
Larger quantity required? Request bulk
Description Product Citations Certificate of Analysis Reviews 0
Description
A lack of MHC-II expression results in a severe immunodeficiency syndrome called MHC-II... more
Close menu
Product information "Anti-RFX5, ID (RFX5, DNA-binding protein RFX5, Regulatory factor X 5) (Azide free) (FITC)"
A lack of MHC-II expression results in a severe immunodeficiency syndrome called MHC-II deficiency, or the bare lymphocyte syndrome (BLS, MIM 209920). At least 4 complementation groups have been identified in B-cell lines established from patients with BLS. The molecular defects in complementation groups B, C, and D all lead to a deficiency in RFX, a nuclear protein complex that binds to the X box of MHC-II promoters. The lack of RFX binding activity in complementation group C results from mutations in the RFX5 gene encoding the 75-kD subunit of RFX (Steimle et al., 1995). RFX5 is the fifth member of the growing family of DNA-binding proteins sharing a novel and highly characteristic DNA-binding domain called the RFX motif. Multiple alternatively spliced transcript variants have been found but the full-length natures of only two have been determined. [provided by RefSeq]. Applications: Suitable for use in Western Blot, FLISA, Recommended Dilution: FLISA: 1:1,000, Western Blot: 1:100-500, Storage and Stability: Store product at 4°C if to be used immediately within two weeks. For long-term storage, aliquot to avoid repeated freezing and thawing and store at -20°C. Aliquots are stable at -20°C for 12 months after receipt. Dilute required amount only prior to immediate use. Further dilutions can be made in assay buffer. Caution: FITC conjugates are sensitive to light. For maximum recovery of product, centrifuge the original vial after thawing and prior to removing the cap. , , Note: Applications are based on unconjugated antibody.

Caution
Our products are for laboratory research use only: Not for administration to humans!
Product Citations
Information about the product reference will follow. more
Close menu
Certificate of Analysis
You will get a certificate here
Go back
Log in or register to request a certificate of analysis.
Reviews 0
Read, write and discuss reviews... more
Close menu
Customer review for "Anti-RFX5, ID (RFX5, DNA-binding protein RFX5, Regulatory factor X 5) (Azide free) (FITC)"
Write a review
Log in or register to review a product.
Similar products
Similar products 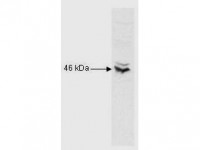 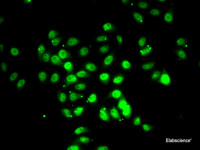