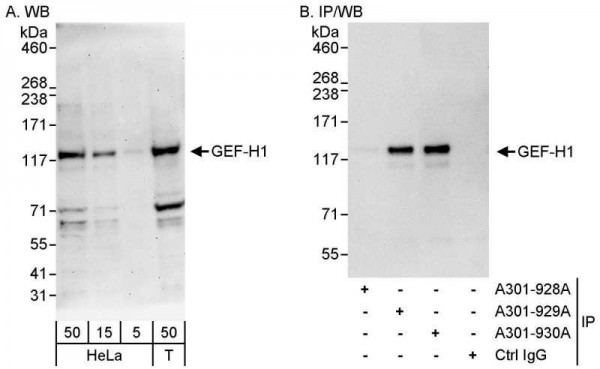 You can also order using info@biomol.com or FAX at 0049-40-85326022
Bigger quantity required? Request Bulk
Description Product Citations Certificate of Analysis Reviews 0
Description
Protein function: Activates Rho-GTPases by promoting the exchange of GDP for GTP. May be involved... more
Close menu
Product information "Anti-GEF-H1"
Protein function: Activates Rho-GTPases by promoting the exchange of GDP for GTP. May be involved in epithelial barrier permeability, cell motility and polarization, dendritic spine morphology, antigen presentation, leukemic cell differentiation, cell cycle regulation, innate immune response, and cancer. Binds Rac-GTPases, but does not seem to promote nucleotide exchange activity toward Rac-GTPases, which was uniquely reported in PubMed:9857026. May stimulate instead the cortical activity of Rac. Inactive toward CDC42, TC10, or Ras-GTPases. Forms an intracellular sensing system along with NOD1 for the detection of microbial effectors during cell invasion by pathogens. Required for RHOA and RIP2 dependent NF-kappaB signaling pathways activation upon S.flexneri cell invasion. Involved not only in sensing peptidoglycan (PGN)-derived muropeptides through NOD1 that is independent of its GEF activity, but also in the activation of NF-kappaB by Shigella effector proteins (IpgB2 and OspB) which requires its GEF activity and the activation of RhoA. Involved in innate immune signaling transduction pathway promoting cytokine IL6/interleukin-6 and TNF- alpha secretion in macrophage upon stimulation by bacterial peptidoglycans, acts as a signaling intermediate between NOD2 receptor and RIPK2 kinase. Contributes to the tyrosine phosphorylation of RIPK2 through Src tyrosine kinase leading to NF-kappaB activation by NOD2. Overexpression activates Rho-, but not Rac-GTPases, and increases paracellular permeability. Involved in neuronal progenitor cell division and differentiation (PubMed:28453519). Involved in the migration of precerebellar neurons. [The UniProt Consortium]

Caution
Our products are for laboratory research use only: Not for administration to humans!
Product Citations
Information about the product reference will follow. more
Close menu
Certificate of Analysis
You will get a certificate here
Go back
Log in or register to request a certificate of analysis.
Reviews 0
Read, write and discuss reviews... more
Close menu
Customer review for "Anti-GEF-H1"
Write a review
Log in or register to review a product.
Similar products
Similar products 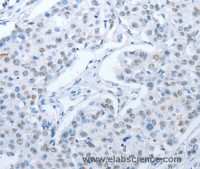 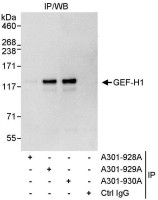 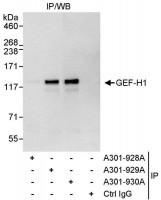 Anti-GEF-H1
From 131.00€ *
Viewed
This website uses cookies, which are necessary for the technical operation of the website and are always set. Other cookies, which increase the usability of this website, serve for direct advertising or simplify interaction with other websites and social networks, will only be used with your consent. More information
Decline Accept all Configure