You can also order using info@biomol.com or FAX at 0049-40-85326022
Bigger quantity required? Request Bulk
Description Certificate of Analysis Reviews 0
Description
0.2 mg/ml in 1X PBS with 0.1 mg/ml BSA (US sourced) and 0.05% sodium azide. Beta Catenin is a... more
Close menu
Product information "Anti-Beta Catenin, clone 5H10"
0.2 mg/ml in 1X PBS with 0.1 mg/ml BSA (US sourced) and 0.05% sodium azide. Beta Catenin is a dual function protein, regulating the coordination of cellûcell adhesion and gene transcription. In humans, the CTNNB1 protein is encoded by the CTNNB1 gene. In Drosophila, the homologous protein is called armadillo. Beta catenin is a subunit of the cadherin protein complex and acts as an intracellular signal transducer in the Wnt signaling pathway. It is a member of the catenin protein family and homologous to gamma-Catenin, also known as plakoglobin. Beta-Catenin is widely expressed in many tissues. In cardiac muscle, it localizes to adherens junctions in intercalated disc structures, which are critical for electrical and mechanical coupling between adjacent cardiomyocyte. [Wiki] Protein function: Key downstream component of the canonical Wnt signaling pathway. In the absence of Wnt, forms a complex with AXIN1, AXIN2, APC, CSNK1A1 and GSK3B that promotes phosphorylation on N-terminal Ser and Thr residues and ubiquitination of CTNNB1 via BTRC and its subsequent degradation by the proteasome. In the presence of Wnt ligand, CTNNB1 is not ubiquitinated and accumulates in the nucleus, where it acts as a coactivator for transcription factors of the TCF/LEF family, leading to activate Wnt responsive genes. Involved in the regulation of cell adhesion. Acts as a negative regulator of centrosome cohesion. Involved in the CDK2/PTPN6/CTNNB1/CEACAM1 pathway of insulin internalization. Blocks anoikis of malignant kidney and intestinal epithelial cells and promotes their anchorage-independent growth by down-regulating DAPK2. Disrupts PML function and PML-NB formation by inhibiting RANBP2-mediated sumoylation of PML (PubMed:17524503, PubMed:18077326, PubMed:18086858, PubMed:18957423, PubMed:21262353, PubMed:22647378, PubMed:22699938, PubMed:22155184). Promotes neurogenesis by maintaining sympathetic neuroblasts within the cell cycle. [The UniProt Consortium] 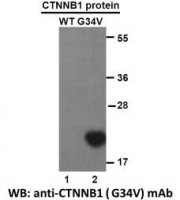 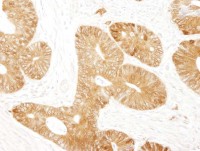 Anti-CTNNB1 (CTNNB1, CTNNB, Catenin beta-1, Beta-catenin)
557.00€ *
Viewed
This website uses cookies, which are necessary for the technical operation of the website and are always set. Other cookies, which increase the usability of this website, serve for direct advertising or simplify interaction with other websites and social networks, will only be used with your consent. More information
Decline Accept all Configure