You can also order using info@biomol.com or FAX at 0049-40-85326022
Bigger quantity required? Request Bulk
Description Certificate of Analysis Reviews 0
Description
Protein function: Transcriptional activator which regulates the transcription of various genes,... more
Close menu
Product information "Anti-ATF2"
Protein function: Transcriptional activator which regulates the transcription of various genes, including those involved in anti- apoptosis, cell growth, and DNA damage response. Dependent on its binding partner, binds to CRE (cAMP response element) consensus sequences (5'-TGACGTCA-3') or to AP-1 (activator protein 1) consensus sequences (5'-TGACTCA-3'). In the nucleus, contributes to global transcription and the DNA damage response, in addition to specific transcriptional activities that are related to cell development, proliferation and death. In the cytoplasm, interacts with and perturbs HK1- and VDAC1-containing complexes at the mitochondrial outer membrane, thereby impairing mitochondrial membrane potential, inducing mitochondrial leakage and promoting cell death. The phosphorylated form (mediated by ATM) plays a role in the DNA damage response and is involved in the ionizing radiation (IR)-induced S phase checkpoint control and in the recruitment of the MRN complex into the IR-induced foci (IRIF). Exhibits histone acetyltransferase (HAT) activity which specifically acetylates histones H2B and H4 in vitro. In concert with CUL3 and RBX1, promotes the degradation of KAT5 thereby attenuating its ability to acetylate and activate ATM. Can elicit oncogenic or tumor suppressor activities depending on the tissue or cell type. [The UniProt Consortium] 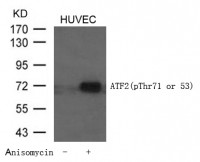 Anti-phospho-ATF2 (Thr73 or 55)
From 322.00€ *
Viewed
This website uses cookies, which are necessary for the technical operation of the website and are always set. Other cookies, which increase the usability of this website, serve for direct advertising or simplify interaction with other websites and social networks, will only be used with your consent. More information
Decline Accept all Configure