You can also order using info@biomol.com or FAX at 0049-40-85326022
Bigger quantity required? Request Bulk
Description Certificate of Analysis Reviews 0
Description
1 mg/ml in 1X PBS, BSA free, sodium azide free. Recognizes a protein of 102kDa, identified as... more
Close menu
Product information "Anti-Alpha Catenin, clone 1G5"
1 mg/ml in 1X PBS, BSA free, sodium azide free. Recognizes a protein of 102kDa, identified as Catenin, alpha-1. Catenins comprise a large family of Ca2+-dependent, homotypic cell-cell adhesion molecules that play important roles in development, epithelial cell polarity and tumor progression. Alpha-Catenin is a key regulator of actin dynamics in cell-cell adhesion. During cell-cell adhesion, alpha-Catenin forms a heterodimer with beta-Catenin and links the cadherins to actin associated with the cytoskeleton. Alpha-Catenin also regulates the beta-Catenin signaling in various cells. It displays the tumor suppressor activity and is found to be down regulated in some forms of breast cancer. Protein function: Associates with the cytoplasmic domain of a variety of cadherins. The association of catenins to cadherins produces a complex which is linked to the actin filament network, and which seems to be of primary importance for cadherins cell-adhesion properties. Can associate with both E- and N-cadherins. Originally believed to be a stable component of E-cadherin/catenin adhesion complexes and to mediate the linkage of cadherins to the actin cytoskeleton at adherens junctions. In contrast, cortical actin was found to be much more dynamic than E-cadherin/catenin complexes and CTNNA1 was shown not to bind to F-actin when assembled in the complex suggesting a different linkage between actin and adherens junctions components. The homodimeric form may regulate actin filament assembly and inhibit actin branching by competing with the Arp2/3 complex for binding to actin filaments. May play a crucial role in cell differentiation. [The UniProt Consortium] 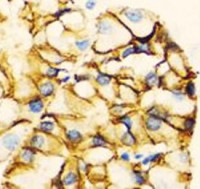 Anti-Alpha-catenin (Ab-641)
483.00€ *
Viewed
This website uses cookies, which are necessary for the technical operation of the website and are always set. Other cookies, which increase the usability of this website, serve for direct advertising or simplify interaction with other websites and social networks, will only be used with your consent. More information
Decline Accept all Configure