You can also order using info@biomol.com or FAX at 0049-40-85326022
Bigger quantity required? Request Bulk
Description Certificate of Analysis Reviews 0
Description
1 mg/ml in sterile PBS, BSA free, sodium azide free. The small ubiquitin-related modifier (SUMO)... more
Close menu
Product information "Anti-SUMO-2, clone SUMO2/1199"
1 mg/ml in sterile PBS, BSA free, sodium azide free. The small ubiquitin-related modifier (SUMO) proteins, which include SUMO-1, 2 and 3, belong to the ubiquitin-like protein family. Like ubiquitin, the SUMO proteins are synthesized as precursor proteins that undergo processing before conjugation to target proteins. Also, both utilize the E1, E2 and E3 cascade enzymes for conjugation. However, SUMO and ubiquitin differ with respect to targeting. Ubiquitination predominantly targets proteins for degradation, whereas sumoylation targets proteins to a variety of cellular processing, including nuclear transport, transcriptional regulation, apoptosis and protein stability. The unconjugated SUMO-1, 2 and 3 proteins localize to the nuclear membrane, nuclear bodies and cytoplasm, respectively. SUMO-1 utilizes Ubc9 for conjugation to several target proteins, which include MDM2, p53, PML and RanGap1. SUMO-2 and 3 contribute to a greater percentage of protein modification than does SUMO-1 and unlike SUMO-1, they can form polymeric chains. In addition, SUMO-3 regulates beta-Amyloid generation and may be critical in the onset or progression of Alzheimer s disease. Protein function: Ubiquitin-like protein which can be covalently attached to target lysines either as a monomer or as a lysine-linked polymer. Does not seem to be involved in protein degradation and may function as an antagonist of ubiquitin in the degradation process. Plays a role in a number of cellular processes such as nuclear transport, DNA replication and repair, mitosis and signal transduction. Covalent attachment to its substrates requires prior activation by the E1 complex SAE1-SAE2 and linkage to the E2 enzyme UBE2I, and can be promoted by an E3 ligase such as PIAS1-4, RANBP2 or CBX4 (PubMed:11451954, PubMed:18538659, PubMed:21965678). Plays a role in the regulation of sumoylation status of SETX (PubMed:24105744). [The UniProt Consortium] 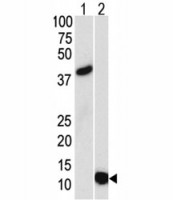 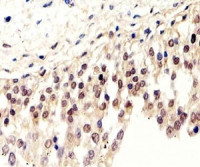 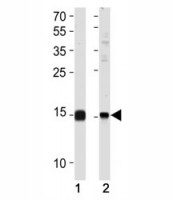 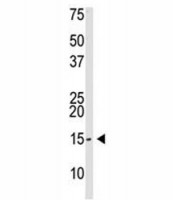 Anti-SUMO3
From 119.00€ *
Viewed
This website uses cookies, which are necessary for the technical operation of the website and are always set. Other cookies, which increase the usability of this website, serve for direct advertising or simplify interaction with other websites and social networks, will only be used with your consent. More information
Decline Accept all Configure