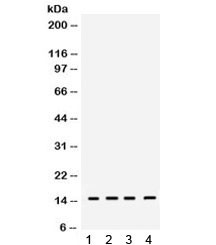 You can also order using info@biomol.com or FAX at 0049-40-85326022
Bigger quantity required? Request Bulk
Description Certificate of Analysis Reviews 0
Description
0.5mg/ml if reconstituted with 0.2ml sterile DI water. RING-box protein 1, also known as ROC1, is... more
Close menu
Product information "Anti-RBX1 / ROC1"
0.5mg/ml if reconstituted with 0.2ml sterile DI water. RING-box protein 1, also known as ROC1, is a protein that in humans is encoded by the RBX1 gene. This gene is mapped to chromosome 22q13.2 based on an alignment of the RBX1 sequence with the genomic sequence. ROC1 is recruited by cullin-1 to form a quaternary SCF (HOS)-ROC1 holoenzyme (with SKP1 and the BTRCP homolog HOS). SCF (HOS)-ROC1 binds IKK-beta-phosphorylated I-kappa-B-alpha and catalyzes its ubiquitination in the presence of ubiquitin, E1, and CDC34. Conclusively, ROC1 plays a unique role in the ubiquitination reaction by heterodimerizing with cullin-1 to catalyze ubiquitin polymerization. Protein function: E3 ubiquitin ligase component of multiple cullin-RING- based E3 ubiquitin-protein ligase complexes which mediate the ubiquitination and subsequent proteasomal degradation of target proteins, including proteins involved in cell cycle progression, signal transduction, transcription and transcription-coupled nucleotide excision repair. The functional specificity of the E3 ubiquitin-protein ligase complexes depends on the variable substrate recognition components. As a component of the CSA complex promotes the ubiquitination of ERCC6 resulting in proteasomal degradation. Through the RING-type zinc finger, seems to recruit the E2 ubiquitination enzyme, like CDC34, to the complex and brings it into close proximity to the substrate. Probably also stimulates CDC34 autoubiquitination. May be required for histone H3 and histone H4 ubiquitination in response to ultraviolet and for subsequent DNA repair. Promotes the neddylation of CUL1, CUL2, CUL4 and CUL4 via its interaction with UBE2M. Involved in the ubiquitination of KEAP1, ENC1 and KLHL41. In concert with ATF2 and CUL3, promotes degradation of KAT5 thereby attenuating its ability to acetylate and activate ATM. [The UniProt Consortium]

Caution
Our products are for laboratory research use only: Not for administration to humans!
Certificate of Analysis
You will get a certificate here
Go back
Log in or register to request a certificate of analysis.
Reviews 0
Read, write and discuss reviews... more
Close menu
Customer review for "Anti-RBX1 / ROC1"
Write a review
Log in or register to review a product.
Similar products
Similar products 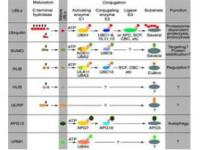 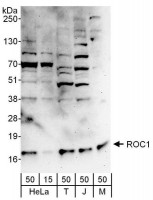 Anti-ROC1
From 125.00€ *
Viewed
This website uses cookies, which are necessary for the technical operation of the website and are always set. Other cookies, which increase the usability of this website, serve for direct advertising or simplify interaction with other websites and social networks, will only be used with your consent. More information
Decline Accept