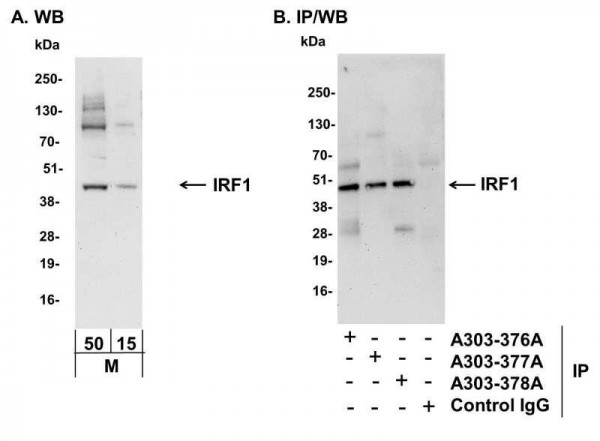 You can also order using info@biomol.com or FAX at 0049-40-85326022
Bigger quantity required? Request Bulk
Description Product Citations Certificate of Analysis Reviews 0
Description
Protein function: Transcriptional regulator which displays a remarkable functional diversity in... more
Close menu
Product information "Anti-IRF1"
Protein function: Transcriptional regulator which displays a remarkable functional diversity in the regulation of cellular responses. These include the regulation of IFN and IFN-inducible genes, host response to viral and bacterial infections, regulation of many genes expressed during hematopoiesis, inflammation, immune responses and cell proliferation and differentiation, regulation of the cell cycle and induction of growth arrest and programmed cell death following DNA damage. Stimulates both innate and acquired immune responses through the activation of specific target genes and can act as a transcriptional activator and repressor regulating target genes by binding to an interferon- stimulated response element (ISRE) in their promoters. Its target genes for transcriptional activation activity are: genes involved in anti-viral response, such as IFN-alpha/beta, DDX58/RIG-I, TNFSF10/TRAIL, OAS1/2, PIAS1/GBP, EIF2AK2/PKR and RSAD2/viperin, antibacterial response, such as NOS2/INOS, anti-proliferative response, such as p53/TP53, LOX and CDKN1A, apoptosis, such as BBC3/PUMA, CASP1, CASP7 and CASP8, immune response, such as IL7, IL12A/B and IL15, PTGS2/COX2 and CYBB, DNA damage responses and DNA repair, such as POLQ/POLH, MHC class I expression, such as TAP1, PSMB9/LMP2, PSME1/PA28A, PSME2/PA28B and B2M and MHC class II expression, such as CIITA. Represses genes involved in anti- proliferative response, such as BIRC5/survivin, CCNB1, CCNE1, CDK1, CDK2 and CDK4 and in immune response, such as FOXP3, IL4, ANXA2 and TLR4. Stimulates p53/TP53-dependent transcription through enhanced recruitment of EP300 leading to increased acetylation of p53/TP53. Plays an important role in immune response directly affecting NK maturation and activity, macrophage production of IL12, Th1 development and maturation of CD8+ T- cells. Also implicated in the differentiation and maturation of dendritic cells and in the suppression of regulatory T (Treg) cells development. Acts as a tumor suppressor and plays a role not only in antagonism of tumor cell growth but also in stimulating an immune response against tumor cells. [The UniProt Consortium]

Caution
Our products are for laboratory research use only: Not for administration to humans!
Product Citations
Information about the product reference will follow. more
Close menu
Certificate of Analysis
You will get a certificate here
Go back
Log in or register to request a certificate of analysis.
Reviews 0
Read, write and discuss reviews... more
Close menu
Customer review for "Anti-IRF1"
Write a review
Log in or register to review a product.
Similar products
Similar products 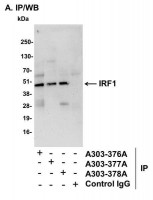 Anti-IRF1
From 131.00€ *
Viewed
This website uses cookies, which are necessary for the technical operation of the website and are always set. Other cookies, which increase the usability of this website, serve for direct advertising or simplify interaction with other websites and social networks, will only be used with your consent. More information
Decline Accept all Configure