You can also order using info@biomol.com or FAX at 0049-40-85326022
Bigger quantity required? Request Bulk
Description Certificate of Analysis Reviews 0
Description
0.2 mg/ml in 1X PBS with 0.1 mg/ml BSA (US sourced) and 0.05% sodium azide. This mAb recognizes a... more
Close menu
Product information "Anti-Cytokeratin 6, clone KRT6/1702"
0.2 mg/ml in 1X PBS with 0.1 mg/ml BSA (US sourced) and 0.05% sodium azide. This mAb recognizes a protein of 56kDa, identified as Cytokeratin 6 (CK6). In humans, multiple isoforms of Cytokeratin 6 (6A-6F), encoded by several highly homologous genes, have distinct tissue expression patterns, and Cytokeratin 6A is the dominant form in epithelial tissue. The gene encoding human Cytokeratin 6A maps to chromosome 12q13, and mutations in this gene are linked to several inheritable hair and skin pathologies. Keratins 6 and 16 are expressed in keratinocytes, which are undergoing rapid turnover in the suprabasal region (also known as hyper-proliferation-related keratins). Keratin 6 is found in hair follicles, suprabasal cells of a variety of internal stratified epithelia, in epidermis, in both normal and hyper-proliferative situations. Epidermal injury results in activation of keratinocytes, which express CK6 and CK16. CK6 is strongly expressed in about 75% of head and neck squamous cell carcinomas. Expression of CK6 is particularly associated with differentiation. Protein function: Epidermis-specific type I keratin involved in wound healing. Involved in the activation of follicular keratinocytes after wounding, while it does not play a major role in keratinocyte proliferation or migration. Participates in the regulation of epithelial migration by inhibiting the activity of SRC during wound repair. [The UniProt Consortium]

Caution
Our products are for laboratory research use only: Not for administration to humans!
Certificate of Analysis
You will get a certificate here
Go back
Log in or register to request a certificate of analysis.
Reviews 0
Read, write and discuss reviews... more
Close menu
Customer review for "Anti-Cytokeratin 6, clone KRT6/1702"
Write a review
Log in or register to review a product.
Similar products
Similar products 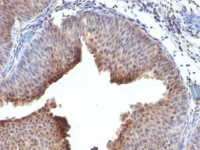 Anti-Keratin 6, clone LHK6
439.00€ *
Viewed
This website uses cookies, which are necessary for the technical operation of the website and are always set. Other cookies, which increase the usability of this website, serve for direct advertising or simplify interaction with other websites and social networks, will only be used with your consent. More information
Decline Accept all Configure