You can also order using info@biomol.com or FAX at 0049-40-85326022
Bigger quantity required? Request Bulk
Description Certificate of Analysis Reviews 0
Description
0.2 mg/ml with 0.1 mg/ml BSA (US sourced), 0.05% sodium azide. Recognizes a protein of 70kDa,... more
Close menu
Product information "Anti-CD86, clone C86/1146"
0.2 mg/ml with 0.1 mg/ml BSA (US sourced), 0.05% sodium azide. Recognizes a protein of 70kDa, which is identified as CD86. CD86 is a type I transmembrane glycoprotein and a member of the immunoglobulin superfamily of cell surface receptors. It is expressed at high levels on resting peripheral monocytes and dendritic cells and at very low density on resting B and T lymphocytes. CD86 expression is rapidly upregulated by B cell specific stimuli with peak expression at 18 to 42 hours after stimulation. CD86, along with CD80/B71, is an important accessory molecule in T cell co-stimulation via its interaction with CD28 and CD152/CTLA4. Since CD86 has rapid kinetics of induction, it is believed to be the major CD28 ligand expressed early in the immune response. It is also found on malignant Hodgkin and Reed Sternberg (HRS) cells in Hodgkin's disease. Protein function: Receptor involved in the costimulatory signal essential for T-lymphocyte proliferation and interleukin-2 production, by binding CD28 or CTLA-4. May play a critical role in the early events of T-cell activation and costimulation of naive T-cells, such as deciding between immunity and anergy that is made by T- cells within 24 hours after activation. Isoform 2 interferes with the formation of CD86 clusters, and thus acts as a negative regulator of T-cell activation. [The UniProt Consortium] 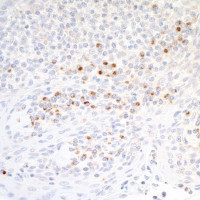 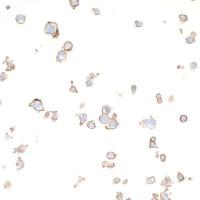 Anti-CD86, clone C86/2160R
541.00€ *
Viewed
This website uses cookies, which are necessary for the technical operation of the website and are always set. Other cookies, which increase the usability of this website, serve for direct advertising or simplify interaction with other websites and social networks, will only be used with your consent. More information
Decline Accept all Configure