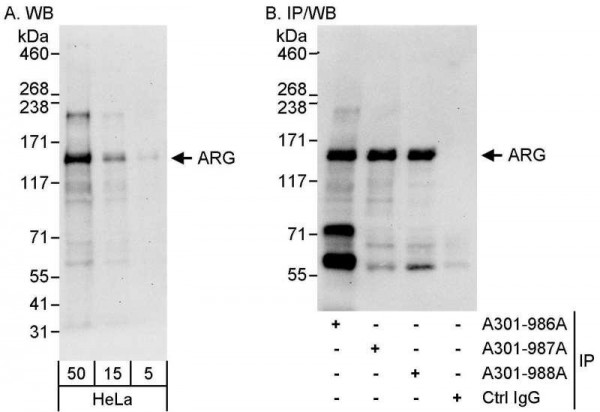 You can also order using info@biomol.com or FAX at 0049-40-85326022
Bigger quantity required? Request Bulk
Description Product Citations Certificate of Analysis Reviews 0
Description
Protein function: Non-receptor tyrosine-protein kinase that plays an ABL1- overlapping role in... more
Close menu
Product information "Anti-ARG"
Protein function: Non-receptor tyrosine-protein kinase that plays an ABL1- overlapping role in key processes linked to cell growth and survival such as cytoskeleton remodeling in response to extracellular stimuli, cell motility and adhesion and receptor endocytosis. Coordinates actin remodeling through tyrosine phosphorylation of proteins controlling cytoskeleton dynamics like MYH10 (involved in movement), CTTN (involved in signaling), or TUBA1 and TUBB (microtubule subunits). Binds directly F-actin and regulates actin cytoskeletal structure through its F-actin- bundling activity. Involved in the regulation of cell adhesion and motility through phosphorylation of key regulators of these processes such as CRK, CRKL, DOK1 or ARHGAP35. Adhesion-dependent phosphorylation of ARHGAP35 promotes its association with RASA1, resulting in recruitment of ARHGAP35 to the cell periphery where it inhibits RHO. Phosphorylates multiple receptor tyrosine kinases like PDGFRB and other substrates which are involved in endocytosis regulation such as RIN1. In brain, may regulate neurotransmission by phosphorylating proteins at the synapse. ABL2 acts also as a regulator of multiple pathological signaling cascades during infection. Pathogens can highjack ABL2 kinase signaling to reorganize the host actin cytoskeleton for multiple purposes, like facilitating intracellular movement and host cell exit. Finally, functions as its own regulator through autocatalytic activity as well as through phosphorylation of its inhibitor, ABI1. [The UniProt Consortium]

Caution
Our products are for laboratory research use only: Not for administration to humans!
Product Citations
Information about the product reference will follow. more
Close menu
Certificate of Analysis
You will get a certificate here
Go back
Log in or register to request a certificate of analysis.
Reviews 0
Read, write and discuss reviews... more
Close menu
Customer review for "Anti-ARG"
Write a review
Log in or register to review a product.
Similar products
Similar products

Anti-ABL2
From 63.00€ *
Viewed
This website uses cookies, which are necessary for the technical operation of the website and are always set. Other cookies, which increase the usability of this website, serve for direct advertising or simplify interaction with other websites and social networks, will only be used with your consent. More information
Decline Accept all Configure