You can also order using info@biomol.com or FAX at 0049-40-85326022
Bigger quantity required? Request Bulk
Description Product Citations Certificate of Analysis Reviews 0
Description
ABL2 (ARG, Abl-related gene), together with c-Abl, forms the Abl family of mammalian non-receptor... more
Close menu
Product information "Anti-ABL2"
ABL2 (ARG, Abl-related gene), together with c-Abl, forms the Abl family of mammalian non-receptor tyrosine kinases. ABL2 and c-Abl share 89%, 90 and 93% identity in their SH3, SH2 and tyrosine domain, but only 29% identity in the carboxy-terminal half. The human c-Abl and ABL2 genes are expressed ubiquitously. ABL2 had been detected predominantly in the cytoplasm, whereas c-Abl shows both cytoplasmic and nuclear localization. c-Abl is involved in two different chromosomal translocations present in human leukemias, which generate Bcr-Abl and TEL-Abl. Recently, TEL-ARG fusion transcripts have also been identified in acute myeloid leukemias (AML). The Abl family kinases may also interact with receptor tyrosine signaling pathways and regulate cellular function such as cell cycle progression, gene transcription and organization of the actin cytoskeletons in neurons. Applications: Western Bloting: 1:500-1:2000., Immunofluorescence: 1:200-1:1000., ELISA: Suggested dilution 1:10000., Optimal dilutions to be determined by the researcher. Storage and Stability: May be stored at 4°C for short-term only. Aliquot to avoid repeated freezing and thawing. Store at -20°C. Aliquots are stable for 12 months. For maximum recovery of product, centrifuge the original vial after thawing and prior to removing the cap.

Caution
Our products are for laboratory research use only: Not for administration to humans!
Product Citations
Information about the product reference will follow. more
Close menu
Certificate of Analysis
You will get a certificate here
Go back
Log in or register to request a certificate of analysis.
Reviews 0
Read, write and discuss reviews... more
Close menu
Customer review for "Anti-ABL2"
Write a review
Log in or register to review a product.
Similar products
Similar products 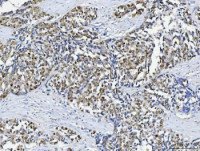 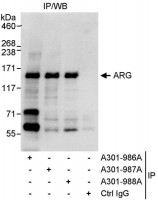 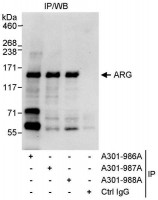 Anti-ARG
From 131.00€ *
Viewed
This website uses cookies, which are necessary for the technical operation of the website and are always set. Other cookies, which increase the usability of this website, serve for direct advertising or simplify interaction with other websites and social networks, will only be used with your consent. More information
Decline Accept all Configure