With so many possibilities, it can be difficult and tedious to select the appropriate calcium indicator for a given Ca2+ flux assay. To streamline the process, here is what we consider to be the eight best single-wavelength, green fluorescent Ca2+ indicators available.

Calcium is a ubiquitous ion involved in many physiological processes. For example, calcium can act as a second messenger in physiological pathways triggering the release of neurotransmitters from neurons. It plays an integral part as an enzyme cofactor regulating enzymatic activity and is essential for the contraction of all muscle cells. Because the physiological regulation of Ca2+ concentration is necessary to initiate and sustain such vital cellular processes, many qualitative and quantitative tools have been developed for this purpose.

A common signaling pathway regulating cytoplasmic Ca2+ concentration is the phospholipase C pathway. This pathway is initiated by the activation of G protein-coupled receptor (GPCR) targets. To monitor GPCR activity, we recommend the robust Ca2+ flux assays that employ highly-sensitive indicators capable of detecting Ca2+ signals. Detection of intracellular Ca2+ is widely used to characterize GPCRs agonists and antagonists in drug discovery, as well as in monitoring synaptic activities in neuroscience research.

Fluo-3 is one of the most commonly utilized green calcium indicators available. It was first developed by Tsien and colleagues in the late 1980s (Grynkiewicz et al. 1985). Since then, Fluo-3 and its analogs have been utilized in many Ca2+ imaging applications. Making considerable contributions to understanding the spatial dynamics of processes associated with Ca2+ signaling pathways.

Fluo-3 is a visible light-excitable, single-wavelength Ca2+ indicator with spectral characteristics similar to fluorescein. Fluo-3 is well excited by the 488 nm argon laser line and can be visualized using the FITC emission filter sets. It has a maximum absorption and emission wavelength at 506 nm and 526 nm, respectively. Compared to other Ca2+ indicators, Fluo-3 has a relatively lower affinity for Ca2+. It exhibits a calcium dissociation constant (Kd) of ~390 nM which can alleviate drawbacks associated with cytosolic buffering at resting Ca2+ levels of ~100 nM. In the Ca2+ free form, Fluo-3 is essentially non-fluorescent. Upon binding Ca2+, the fluorescence intensity of Fluo-3 increases ~100 fold and at saturating Ca2+ levels exhibits a quantum yield of ~0.14.

In past comparative studies, cells loaded with Fluo-3 have displayed favorably large dynamic ranges sensitive at detecting elementary and global Ca2+ fluxes. However, Fluo-3 requires incubation at 37 °C resulting in significant indicator loss by the increase activity of anion transporters sensitive to the same temperature. To improve cellular retention, probenecid, an organic anion transporter inhibitor, is used during cell loading. Unfortunately, probenecid can be toxic to cells and while it inhibits certain anion transporters it may activate others. In addition to being sensitive to temperature changes, Fluo-3 is also pH-sensitive and sensitive to protein binding.

Fluo-4 is a visible light-excitable calcium indicator derived from its predecessor, Fluo-3. Like Fluo-3, Fluo-4 is a non-fluorescent indicator whose intensity increases ~100 fold upon binding Ca2+. Additionally, Fluo-4 is an analog of Fluo-3 exhibiting minor structural modifications attributing to a brighter and more photostable indicator. By replacing two chlorine substituents with fluorines, Fluo-4 displays as wavelength shift of ~12 nm towards the blue spectrum. This establishes a new maximum absorption wavelength at 494 nm making Fluo-4 more efficiently excitable by the 488 nm argon laser line. This attributes to a brighter fluorescence signal at lower dye concentrations making Fluo-4 less phototoxic compared to Fluo-3. Fluo-4 has a slightly higher Ca2+ binding affinity than Fluo-3, with a Kd value of 345 nM. For these reasons, Fluo-4 is better alternative for use with confocal microscopy than Fluo-3.

Although Fluo-4 shows a brighter signal and an improved signal-to-background ratio in analyzing Ca2+ fluxes of adherent cells, it is still only moderately fluorescent in live samples. Just as its predecessor Fluo-3, Fluo-4 also employs the use of probenecid to improve dye retention, which has known to be toxic to cells.

Fluo-8 is a novel green calcium indicator which incorporates the same fluorescein core, utilized in Fluo-3 and Fluo-4, to monitor Ca2+ concentration and flux in cells. This enables Fluo-8 to retain spectral properties identical to Fluo-4 while improving the limitations plaguing Fluo-3 and Fluo-4. Minor structural modifications attributing to the inception of Fluo-8, has led to several enhancements associated with its employment, one being Fluo-8’s improved loading conditions. Compared to Fluo-3 and Fluo-4, that require indicator loading at a temperature of 37 °C, Fluo-8 can be loaded successfully at room temperature reducing the required loading time to just 20 minutes.

Like the other Fluo-dyes, Fluo-8 is non-fluorescent in the Ca2+ free form. Upon binding to Ca2+, Fluo-8 displays a larger fluorescence intensity increase of ~200 fold. This is significantly two times brighter than Fluo-4 and four times brighter than Fluo-3. Fluo-8 is less temperature dependent compared to other probes, which allows for more consistent and reproducible results either at room temperature or 37 °C. Fluo-8 and its analogs are available in four distinct forms each expressing different calcium binding affinities. Fluo-8 has a Kd of ~ 389 nM, Fluo-8H has a Kd of ~ 232 nM, Fluo-8L has a Kd of ~1.86 μM and Fluo-8FF has a Kd of ~10 μM. Fluo-8L and Fluo-8FF have significantly lower Ca2+ binding affinities, making them better suited for detecting intracellular Ca2+ levels in the micromolar range.

Cal-520 is a novel fluorogenic calcium indicator with several noteworthy improvements and advantages compared to older generations of Ca2+ indicators such as Fluo-3 and Fluo-4. One improvement in Cal-520 is a shift in its optimum absorption and emission wavelengths ~12 nm shorter than that of Fluo-3, resulting in a maximum absorption wavelength of 494 nm. This considerably enhances the excitation efficiency of Cal-520 to 94% of its peak maxima when excited by the 488 nm argon laser line which is significantly more efficient than Fluo-3’s 40%. With a maximum emission at 514 nm, Cal-520 is an excellent indicator for multiplexing applications using an indicator with red fluorescence. Additionally, Cal-520’s improved excitation efficiency permits its usage at less toxic or lower dye concentrations. This is advantageous for experiments designed to investigate intracellular Ca2+ measurements via confocal microscopy by reducing the effects of fluorescence saturation on imaging.

Compared to Fluo-3 and Fluo-4, Cal-520 has a slightly higher affinity for Ca2+ with a Kd value of 320 nM. Additionally, Cal-520 is optimized and localized in the cytosol. This reduces indicator compartmentalization in organelles such as the mitochondria, and ensures that the signal detected is an accurate reflection of the changes in concentration of cytosolic free Ca2+. Cal-520 is a robust probe for fluorescence-based assay detection of intracellular calcium mobilization. It is highly-sensitive for evaluating GPCR and calcium channel targets as well as for screening their agonist and antagonists.

Cal-520 is available in AM ester, salt, dextran conjugate and bioconjugate forms to accommodate any experimental design. A significant advantage of using Cal-520 AM, is the elimination of probenecid which can be toxic to live cells. Cal-520 bioconjugates, such as Cal-520 biocytin and biotin, can bind to both avidin and streptavidin without altering its sensitivity to detect Ca2+ responses. Cal-520 dextran conjugates can be microinjected or taken up by cells via endocytosis. Cal-520 dextran conjugates are available conjugated to either 3,000 or 10,000 molecular weight Dextran molecules depending on the tissue type being investigated.

Calbryte-520 is a next generation Ca2+ indicator recently introduced as a superior replacement for traditional green calcium indicators such as Fluo-3 and Fluo-4. With a fluorescence excitation and emission maxima of 492 nm and 514 nm, respectively, Calbryte-520 is the best indicator on this list suited for efficient excitation at the 488 nm argon laser line. Calbryte-520’s spectral properties closely match that of Fluo-4, Calcium Green-1 and Oregon Green 488 BAPTA-1, allowing for a seamless transition between Calbryte 520 and any of these three indicators. Calbryte 520 is available in either AM ester form or as a potassium salt derivative. Calbryte 520, AM’s cell-permeability makes it well-suited for assaying Ca2+ concentrations in live cells, whereas, Calbryte 520, potassium salt’s cell-impermeability makes it suited for the calibration of Ca2+ indicators.

During Calbryte 520’s development, improvements were centered on significantly enhancing its signal-to-background ratio. To reduce background interference, Calbryte 520, AM remains inactive and non-fluorescent showing minimal response to trace Ca2+ present in extracellular solution. AM esters facilitate Calbryte 520’s passive diffusion across the cell membrane where nonspecific intracellular esterases cleave off the AM ester functional groups activating Calbryte-520’s fluorescence and responsiveness to Ca2+. A significant advantage of Calbryte-520’s usage is the elimination of probenecid to improve dye retention (other than Cal-520, all other Ca2+ indicators mentioned in this list require probenecid). Activated Calbryte-520 exhibits excellent cellular retention and localization within the cytosol. This ensures that the signal detected is an accurate assessment of intracellular Ca2+ levels.

Calcium Green-1 is a visible light-excitable indicator derived from the fluorescent compound fluorescein. Like its aforementioned predecessors, Fluo-3 and Fluo-4, Calcium Green-1 exhibits an increase in its fluorescence emission intensity upon binding to free Ca2+. With a maximum absorption and emission wavelength of 506 nm and 531 nm, respectively, Calcium Green-1 is suitable for excitation by the argon-laser line and visualized using a FITC emission filter set.

Calcium Green-1 is available as a cell-permeable AM ester, or as cell-impermeable dextran conjugates and salt derivatives suitable for various calcium signaling investigations including Ca2+ flux assays and multiphoton excitation imaging of Ca2+ in living tissues. Calcium Green-1 is adaptable for use in various fluorescence platforms such as fluorescence microscopy and flow cytometry.

Oregon Green 488 BAPTA-1 (OG488 BAPTA-1) is a group of bright fluorogenic calcium indicators that shares similar spectral characteristics to Calcium Green-1. The major distinction between the two is OG488 BAPTA-1’s shift in fluorescence absorption and excitation maxima ~10 nm shorter resulting in a maximum absorption wavelength of 494 nm. This significantly improves OG488 BAPTA-1 excitation efficiency at the 488 nm argon laser line. In Ca2+ free solutions, OG488 BAPTA-1 is moderately fluorescent. Upon binding to free Ca2+, OG488 BAPTA-1 experiences fluorescence emission intensity increase of ~14-fold. Like Calcium Green-1, OG488 BAPTA-1 possesses a quantum yield of approximately 0.7 while maintaining a small dissociation constant of ~140 nM. Such spectral properties of OG488 BAPTA-1 permits its use at lower dye concentrations making it appropriate for investigating intracellular Ca2+ concentrations using a confocal laser-scanning microscope. In addition, studies have been known to implement a dual calcium indicator system utilizing OG488 BAPTA-1. For example, combinations of OG488 BAPTA-1 and Fluo-4 have been used to investigate responses that combine a finite basal signal level with a large stimulus-dependent increase. 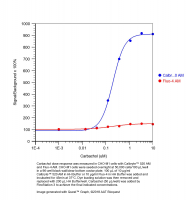 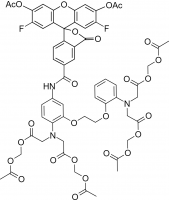 __488 BAPTA-1, AM [similar to Oregon Green(R) 488...
230.00€ *
This website uses cookies, which are necessary for the technical operation of the website and are always set. Other cookies, which increase the usability of this website, serve for direct advertising or simplify interaction with other websites and social networks, will only be used with your consent. More information
Decline Accept all Configure