Cancer immunotherapy seeks to use the many components of the immune system to attack cancer cells. More specifically, immunotherapy maximizes the effectiveness of components of the antigen-presentation and antigen-response system, primarily dendritic cells and lymphocytes, respectively. Ideally, this approach can offer more selective killing of cancer cells than other therapeutic modalities, such as chemotherapy.

Immune checkpoint therapy is a form of cancer immunotherapy that centers on lymphocyte signaling, with a current focus on T cells. These cells can be activated to multiply, secrete cytokines, and kill target cells with high selectivity. Activation requires the T cell receptor (TCR) be stimulated by an antigen presented by the major histocompatibility complex (Ag/MHC). Selectivity and strength of activation are regulated by co-stimulatory or inhibitory signals, the immune checkpoints.

The goal of immune checkpoint therapy is to enhance the ability of T cells to kill cancer cells, primarily by tweaking the regulatory checkpoints on T cells. The best-studied examples are co-receptors that suppress TCR-mediated activation of T cells. CTL-associated protein-4 (CTLA-4) is an inhibitory co-receptor on T cells that, when stimulated at the same time as TCR, blocks cell activation. Antibodies selective for CTLA-4 prevent its stimulation, allowing TCR-mediated T cell activation. While this approach has shown some effectiveness in treating cancer in patients, the response is slow and not always selective for cancer cells.1,2 One major problem is that CTLA-4 blockade works early in T cell development, when antigen-presenting cells are activating T cells to proliferate. A better approach is to intervene when T cells meet cancer cells, where TCR-mediated activation initiates cell killing. Programmed death-1 (PD-1) is a lymphocyte receptor that binds PD-L1 or PD-L2. When PD-L1 is expressed on cancer cells, it causes PD-1 to negatively regulate TCR-mediated activation of T cells, limiting their cytotoxic activity. Several antibodies have been developed to block the ability of PD-L1 to interact with PD-1. Clinical trials using these antibodies to antagonize the PD-L1/PD-1 interaction have demonstrated tumor killing that is both specific and long-lasting.3,4 In May 2016, the first PD-L1 inhibitor was approved by the U.S. Food and Drug Administration for the treatment of bladder cancer.

Figure. Co-stimulation of TCR and CD28 on T cells by Ag/MHC and B7 on dendritic cells activates T cells to proliferate and migrate. Negative regulation of TCR by B7:CTLA-4 signaling can be blocked by therapeutic antibodies. Similarly, signaling from Ag/MHC on cancer cells, through TCR, activates killing of cancer cells by T cells. Inhibition of this activation by PD-L1:PD-1 is another target of therapeutic blockade.

Studies using antibodies to block the inhibitory checkpoint receptors CTLA-4 and PD-1 demonstrate the feasibility of this type of immunotherapy. Of course, antibody blockade of PD-1 will only be effective when cancer cells express ligands that stimulate PD-1. Other cancer cells may use different ligands to suppress the immune system. With this in mind, additional inhibitory checkpoints are being identified (Table), and approaches targeting checkpoint activation can also be considered.1,5

In addition to signaling through surface membrane checkpoint proteins, effective therapies target immunosuppression through metabolic pathways, such as indoleamine dioxygenases (IDOs) and arginase, as well as through soluble signaling factors (e.g., TGF-β, adenosine).6 These may be best targeted using traditional small molecule inhibitors. Combination therapies using both antibodies and inhibitors will be a central part of cancer treatment in the future. 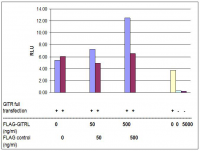 Human TNFSF14 - LIGHT ELISA Kit
613.00€ *
This website uses cookies, which are necessary for the technical operation of the website and are always set. Other cookies, which increase the usability of this website, serve for direct advertising or simplify interaction with other websites and social networks, will only be used with your consent. More information
Decline Accept all Configure