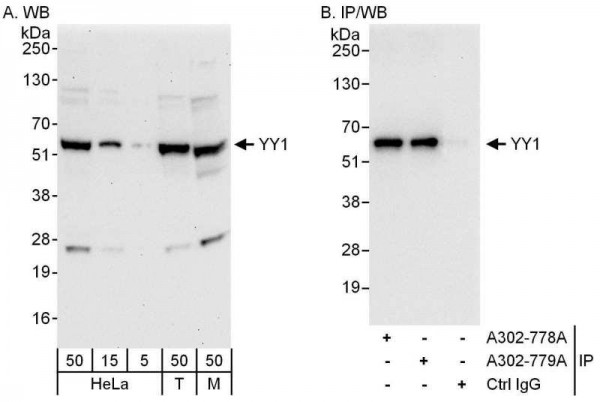 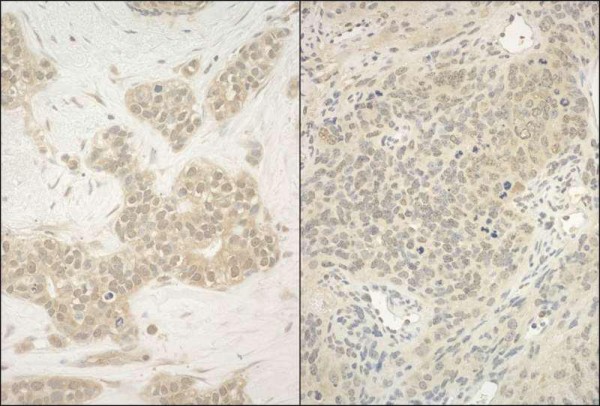 You can also order using info@biomol.com or FAX at 0049-40-85326022
Bigger quantity required? Request Bulk
Description Product Citations Certificate of Analysis Reviews 0
Description
Protein function: Multifunctional transcription factor that exhibits positive and negative... more
Close menu
Product information "Anti-YY1"
Protein function: Multifunctional transcription factor that exhibits positive and negative control on a large number of cellular and viral genes by binding to sites overlapping the transcription start site. Binds to the consensus sequence 5'-CCGCCATNTT-3', some genes have been shown to contain a longer binding motif allowing enhanced binding, the initial CG dinucleotide can be methylated greatly reducing the binding affinity. The effect on transcription regulation is depending upon the context in which it binds and diverse mechanisms of action include direct activation or repression, indirect activation or repression via cofactor recruitment, or activation or repression by disruption of binding sites or conformational DNA changes. Its activity is regulated by transcription factors and cytoplasmic proteins that have been shown to abrogate or completely inhibit YY1-mediated activation or repression. For example, it acts as a repressor in absence of adenovirus E1A protein but as an activator in its presence. Acts synergistically with the SMAD1 and SMAD4 in bone morphogenetic protein (BMP)-mediated cardiac-specific gene expression (PubMed:15329343). Binds to SMAD binding elements (SBEs) (5'- GTCT/AGAC-3') within BMP response element (BMPRE) of cardiac activating regions. May play an important role in development and differentiation. Proposed to recruit the PRC2/EED-EZH2 complex to target genes that are transcriptional repressed. Involved in DNA repair. In vitro, binds to DNA recombination intermediate structures (Holliday junctions). Plays a role in regulating enhancer activation (PubMed:28575647). [The UniProt Consortium]

Caution
Our products are for laboratory research use only: Not for administration to humans!
Product Citations
Information about the product reference will follow. more
Close menu
Certificate of Analysis
You will get a certificate here
Go back
Log in or register to request a certificate of analysis.
Reviews 0
Read, write and discuss reviews... more
Close menu
Customer review for "Anti-YY1"
Write a review
Log in or register to review a product.
Similar products
Similar products

Anti-YY1
From 131.00€ *
Viewed
This website uses cookies, which are necessary for the technical operation of the website and are always set. Other cookies, which increase the usability of this website, serve for direct advertising or simplify interaction with other websites and social networks, will only be used with your consent. More information
Decline Accept all Configure