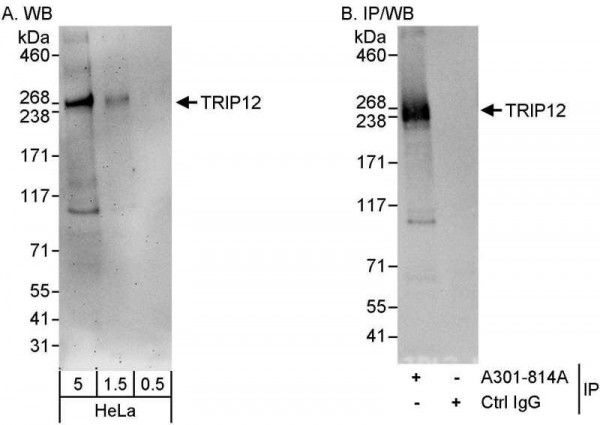 You can also order using info@biomol.com or FAX at 0049-40-85326022
Bigger quantity required? Request Bulk
Description Product Citations Certificate of Analysis Reviews 0
Description
Protein function: E3 ubiquitin-protein ligase involved in ubiquitin fusion degradation (UFD)... more
Close menu
Product information "Anti-TRIP12"
Protein function: E3 ubiquitin-protein ligase involved in ubiquitin fusion degradation (UFD) pathway and regulation of DNA repair. Part of the ubiquitin fusion degradation (UFD) pathway, a process that mediates ubiquitination of protein at their N-terminus, regardeless of the presence of lysine residues in target proteins. In normal cells, mediates ubiquitination and degradation of isoform p19ARF/ARF of CDKN2A, a lysine-less tumor suppressor required for p53/TP53 activation under oncogenic stress. In cancer cells, however, isoform p19ARF/ARF and TRIP12 are located in different cell compartments, preventing isoform p19ARF/ARF ubiquitination and degradation. Does not mediate ubiquitination of isoform p16-INK4a of CDKN2A. Also catalyzes ubiquitination of NAE1 and SMARCE1, leading to their degradation. Ubiquitination and degradation of target proteins is regulated by interaction with proteins such as MYC, TRADD or SMARCC1, which disrupt the interaction between TRIP12 and target proteins. Acts as a key regulator of DNA damage response by acting as a suppressor of RNF168, an E3 ubiquitin-protein ligase that promotes accumulation of 'Lys-63'-linked histone H2A and H2AX at DNA damage sites, thereby acting as a guard against excessive spreading of ubiquitinated chromatin at damaged chromosomes. [The UniProt Consortium]

Caution
Our products are for laboratory research use only: Not for administration to humans!
Product Citations
Information about the product reference will follow. more
Close menu
Certificate of Analysis
You will get a certificate here
Go back
Log in or register to request a certificate of analysis.
Reviews 0
Read, write and discuss reviews... more
Close menu
Customer review for "Anti-TRIP12"
Write a review
Log in or register to review a product.
Similar products
Similar products
Offer

Anti-TRIP12
From 117.00€ *
Viewed
This website uses cookies, which are necessary for the technical operation of the website and are always set. Other cookies, which increase the usability of this website, serve for direct advertising or simplify interaction with other websites and social networks, will only be used with your consent. More information
Decline Accept all Configure