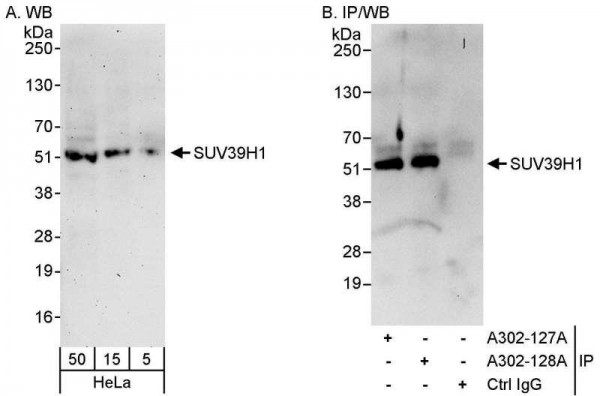 You can also order using info@biomol.com or FAX at 0049-40-85326022
Bigger quantity required? Request Bulk
Description Product Citations Certificate of Analysis Reviews 0
Description
Protein function: Histone methyltransferase that specifically trimethylates 'Lys-9' of histone H3... more
Close menu
Product information "Anti-SUV39H1"
Protein function: Histone methyltransferase that specifically trimethylates 'Lys-9' of histone H3 using monomethylated H3 'Lys- 9' as substrate. Also weakly methylates histone H1 (in vitro). H3 'Lys-9' trimethylation represents a specific tag for epigenetic transcriptional repression by recruiting HP1 (CBX1, CBX3 and/or CBX5) proteins to methylated histones. Mainly functions in heterochromatin regions, thereby playing a central role in the establishment of constitutive heterochromatin at pericentric and telomere regions. H3 'Lys-9' trimethylation is also required to direct DNA methylation at pericentric repeats. SUV39H1 is targeted to histone H3 via its interaction with RB1 and is involved in many processes, such as repression of MYOD1-stimulated differentiation, regulation of the control switch for exiting the cell cycle and entering differentiation, repression by the PML-RARA fusion protein, BMP-induced repression, repression of switch recombination to IgA and regulation of telomere length. Component of the eNoSC (energy-dependent nucleolar silencing) complex, a complex that mediates silencing of rDNA in response to intracellular energy status and acts by recruiting histone- modifying enzymes. The eNoSC complex is able to sense the energy status of cell: upon glucose starvation, elevation of NAD(+)/NADP(+) ratio activates SIRT1, leading to histone H3 deacetylation followed by dimethylation of H3 at 'Lys-9' (H3K9me2) by SUV39H1 and the formation of silent chromatin in the rDNA locus. Recruited by the large PER complex to the E-box elements of the circadian target genes such as PER2 itself or PER1, contributes to the conversion of local chromatin to a heterochromatin-like repressive state through H3 'Lys-9' trimethylation. [The UniProt Consortium]

Caution
Our products are for laboratory research use only: Not for administration to humans!
Product Citations
Information about the product reference will follow. more
Close menu
Certificate of Analysis
You will get a certificate here
Go back
Log in or register to request a certificate of analysis.
Reviews 0
Read, write and discuss reviews... more
Close menu
Customer review for "Anti-SUV39H1"
Write a review
Log in or register to review a product.
Similar products
Similar products

Anti-SUV39H1
From 117.00€ *
Viewed
This website uses cookies, which are necessary for the technical operation of the website and are always set. Other cookies, which increase the usability of this website, serve for direct advertising or simplify interaction with other websites and social networks, will only be used with your consent. More information
Decline Accept all Configure