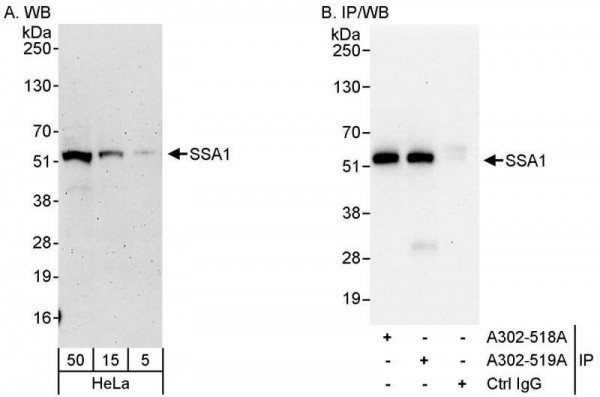 You can also order using info@biomol.com or FAX at 0049-40-85326022
Bigger quantity required? Request Bulk
Description Product Citations Certificate of Analysis Reviews 0
Description
Protein function: E3 ubiquitin-protein ligase whose activity is dependent on E2 enzymes, UBE2D1,... more
Close menu
Product information "Anti-SSA1"
Protein function: E3 ubiquitin-protein ligase whose activity is dependent on E2 enzymes, UBE2D1, UBE2D2, UBE2E1 and UBE2E2. Forms a ubiquitin ligase complex in cooperation with the E2 UBE2D2 that is used not only for the ubiquitination of USP4 and IKBKB but also for its self-ubiquitination. Component of cullin-RING-based SCF (SKP1-CUL1-F-box protein) E3 ubiquitin-protein ligase complexes such as SCF(SKP2)-like complexes. A TRIM21-containing SCF(SKP2)- like complex is shown to mediate ubiquitination of CDKN1B ('Thr- 187' phosphorylated-form), thereby promoting its degradation by the proteasome. Monoubiquitinates IKBKB that will negatively regulates Tax-induced NF-kappa-B signaling. Negatively regulates IFN-beta production post-pathogen recognition by polyubiquitin- mediated degradation of IRF3. Mediates the ubiquitin-mediated proteasomal degradation of IgG1 heavy chain, which is linked to the VCP-mediated ER-associated degradation (ERAD) pathway. Promotes IRF8 ubiquitination, which enhanced the ability of IRF8 to stimulate cytokine genes transcription in macrophages. Plays a role in the regulation of the cell cycle progression. Enhances the decapping activity of DCP2. Exists as a ribonucleoprotein particle present in all mammalian cells studied and composed of a single polypeptide and one of four small RNA molecules. At least two isoforms are present in nucleated and red blood cells, and tissue specific differences in RO/SSA proteins have been identified. The common feature of these proteins is their ability to bind HY RNAs.2. Involved in the regulation of innate immunity and the inflammatory response in response to IFNG/IFN-gamma. Organizes autophagic machinery by serving as a platform for the assembly of ULK1, Beclin 1/BECN1 and ATG8 family members and recognizes specific autophagy targets, thus coordinating target recognition with assembly of the autophagic apparatus and initiation of autophagy. Acts as an autophagy receptor for the degradation of IRF3, hence attenuating type I interferon (IFN)-dependent immune responses (PubMed:26347139). [The UniProt Consortium]

Caution
Our products are for laboratory research use only: Not for administration to humans!
Product Citations
Information about the product reference will follow. more
Close menu
Certificate of Analysis
You will get a certificate here
Go back
Log in or register to request a certificate of analysis.
Reviews 0
Read, write and discuss reviews... more
Close menu
Customer review for "Anti-SSA1"
Write a review
Log in or register to review a product.
Similar products
Similar products 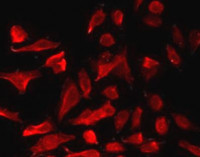 Anti-SSA1
From 131.00€ *
Viewed
This website uses cookies, which are necessary for the technical operation of the website and are always set. Other cookies, which increase the usability of this website, serve for direct advertising or simplify interaction with other websites and social networks, will only be used with your consent. More information
Decline Accept all Configure