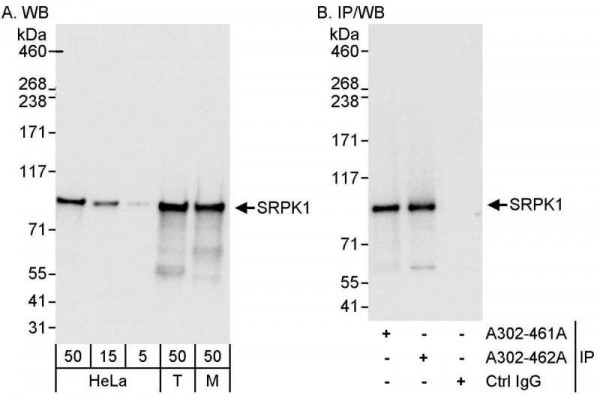 You can also order using info@biomol.com or FAX at 0049-40-85326022
Bigger quantity required? Request Bulk
Description Product Citations Certificate of Analysis Reviews 0
Description
Protein function: Serine/arginine-rich protein-specific kinase which specifically phosphorylates... more
Close menu
Product information "Anti-SRPK1"
Protein function: Serine/arginine-rich protein-specific kinase which specifically phosphorylates its substrates at serine residues located in regions rich in arginine/serine dipeptides, known as RS domains and is involved in the phosphorylation of SR splicing factors and the regulation of splicing. Plays a central role in the regulatory network for splicing, controlling the intranuclear distribution of splicing factors in interphase cells and the reorganization of nuclear speckles during mitosis. Can influence additional steps of mRNA maturation, as well as other cellular activities, such as chromatin reorganization in somatic and sperm cells and cell cycle progression. Isoform 2 phosphorylates SFRS2, ZRSR2, LBR and PRM1. Isoform 2 phosphorylates SRSF1 using a directional (C-terminal to N-terminal) and a dual-track mechanism incorporating both processive phosphorylation (in which the kinase stays attached to the substrate after each round of phosphorylation) and distributive phosphorylation steps (in which the kinase and substrate dissociate after each phosphorylation event). The RS domain of SRSF1 binds first to a docking groove in the large lobe of the kinase domain of SRPK1. This induces certain structural changes in SRPK1 and/or RRM2 domain of SRSF1, allowing RRM2 to bind the kinase and initiate phosphorylation. The cycles continue for several phosphorylation steps in a processive manner (steps 1-8) until the last few phosphorylation steps (approximately steps 9-12). During that time, a mechanical stress induces the unfolding of the beta-4 motif in RRM2, which then docks at the docking groove of SRPK1. This also signals RRM2 to begin to dissociate, which facilitates SRSF1 dissociation after phosphorylation is completed. Isoform 2 can mediate hepatitis B virus (HBV) core protein phosphorylation. It plays a negative role in the regulation of HBV replication through a mechanism not involving the phosphorylation of the core protein but by reducing the packaging efficiency of the pregenomic RNA (pgRNA) without affecting the formation of the viral core particles. Isoform 1 and isoform 2 can induce splicing of exon 10 in MAPT/TAU. The ratio of isoform 1/isoform 2 plays a decisive role in determining cell fate in K-562 leukaemic cell line: isoform 2 favors proliferation where as isoform 1 favors differentiation. [The UniProt Consortium]

Caution
Our products are for laboratory research use only: Not for administration to humans!
Product Citations
Information about the product reference will follow. more
Close menu
Certificate of Analysis
You will get a certificate here
Go back
Log in or register to request a certificate of analysis.
Reviews 0
Read, write and discuss reviews... more
Close menu
Customer review for "Anti-SRPK1"
Write a review
Log in or register to review a product.
Similar products
Similar products

Anti-SRPK1
From 131.00€ *
Viewed
This website uses cookies, which are necessary for the technical operation of the website and are always set. Other cookies, which increase the usability of this website, serve for direct advertising or simplify interaction with other websites and social networks, will only be used with your consent. More information
Decline Accept all Configure