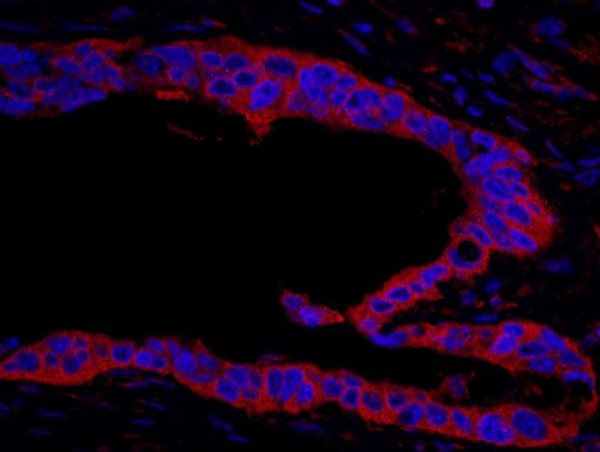 You can also order using info@biomol.com or FAX at 0049-40-85326022
Bigger quantity required? Request Bulk
Description Certificate of Analysis Reviews 0
Description
Protein function: Serine/threonine-protein kinase that acts downstream of ERK (MAPK1/ERK2 and... more
Close menu
Product information "Anti-RSK1 (IHC)"
Protein function: Serine/threonine-protein kinase that acts downstream of ERK (MAPK1/ERK2 and MAPK3/ERK1) signaling and mediates mitogenic and stress-induced activation of the transcription factors CREB1, ETV1/ER81 and NR4A1/NUR77, regulates translation through RPS6 and EIF4B phosphorylation, and mediates cellular proliferation, survival, and differentiation by modulating mTOR signaling and repressing pro-apoptotic function of BAD and DAPK1. In fibroblast, is required for EGF-stimulated phosphorylation of CREB1, which results in the subsequent transcriptional activation of several immediate-early genes. In response to mitogenic stimulation (EGF and PMA), phosphorylates and activates NR4A1/NUR77 and ETV1/ER81 transcription factors and the cofactor CREBBP. Upon insulin- derived signal, acts indirectly on the transcription regulation of several genes by phosphorylating GSK3B at 'Ser-9' and inhibiting its activity. Phosphorylates RPS6 in response to serum or EGF via an mTOR-independent mechanism and promotes translation initiation by facilitating assembly of the pre-initiation complex. In response to insulin, phosphorylates EIF4B, enhancing EIF4B affinity for the EIF3 complex and stimulating cap-dependent translation. Is involved in the mTOR nutrient-sensing pathway by directly phosphorylating TSC2 at 'Ser-1798', which potently inhibits TSC2 ability to suppress mTOR signaling, and mediates phosphorylation of RPTOR, which regulates mTORC1 activity and may promote rapamycin-sensitive signaling independently of the PI3K/AKT pathway. Mediates cell survival by phosphorylating the pro-apoptotic proteins BAD and DAPK1 and suppressing their pro- apoptotic function. Promotes the survival of hepatic stellate cells by phosphorylating CEBPB in response to the hepatotoxin carbon tetrachloride (CCl4). Mediates induction of hepatocyte prolifration by TGFA through phosphorylation of CEBPB. Is involved in cell cycle regulation by phosphorylating the CDK inhibitor CDKN1B, which promotes CDKN1B association with 14-3-3 proteins and prevents its translocation to the nucleus and inhibition of G1 progression. Phosphorylates EPHA2 at 'Ser-897', the RPS6KA-EPHA2 signaling pathway controls cell migration (PubMed:26158630). [The UniProt Consortium]

Caution
Our products are for laboratory research use only: Not for administration to humans!
Certificate of Analysis
You will get a certificate here
Go back
Log in or register to request a certificate of analysis.
Reviews 0
Read, write and discuss reviews... more
Close menu
Customer review for "Anti-RSK1 (IHC)"
Write a review
Log in or register to review a product.
Similar products
Similar products

Anti-P90RSK
314.00€ *
Viewed
This website uses cookies, which are necessary for the technical operation of the website and are always set. Other cookies, which increase the usability of this website, serve for direct advertising or simplify interaction with other websites and social networks, will only be used with your consent. More information
Decline Accept all Configure