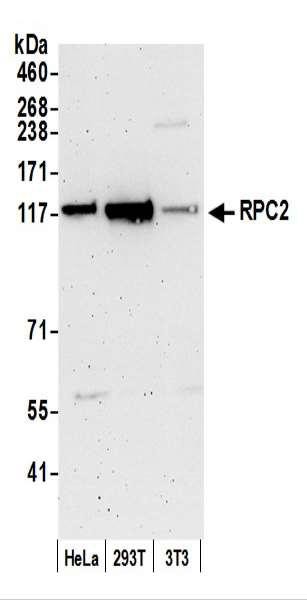 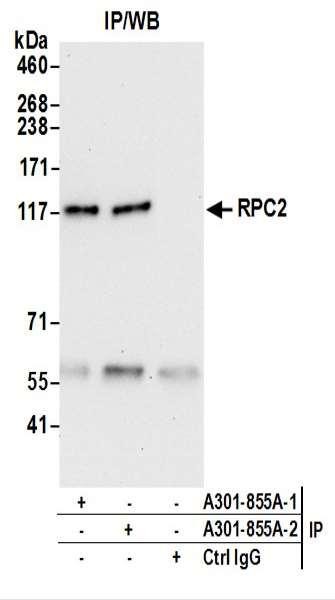 You can also order using info@biomol.com or FAX at 0049-40-85326022
Bigger quantity required? Request Bulk
Description Product Citations Certificate of Analysis Reviews 0
Description
Protein function: DNA-dependent RNA polymerase catalyzes the transcription of DNA into RNA using... more
Close menu
Product information "Anti-RPC2"
Protein function: DNA-dependent RNA polymerase catalyzes the transcription of DNA into RNA using the four ribonucleoside triphosphates as substrates. Second largest core component of RNA polymerase III which synthesizes small RNAs, such as 5S rRNA and tRNAs. Proposed to contribute to the polymerase catalytic activity and forms the polymerase active center together with the largest subunit. Pol III is composed of mobile elements and RPC2 is part of the core element with the central large cleft and probably a clamp element that moves to open and close the cleft. Plays a key role in sensing and limiting infection by intracellular bacteria and DNA viruses. Acts as nuclear and cytosolic DNA sensor involved in innate immune response. Can sense non-self dsDNA that serves as template for transcription into dsRNA. The non-self RNA polymerase III transcripts, such as Epstein-Barr virus-encoded RNAs (EBERs) induce type I interferon and NF- Kappa-B through the RIG-I pathway. [The UniProt Consortium]

Caution
Our products are for laboratory research use only: Not for administration to humans!
Product Citations
Information about the product reference will follow. more
Close menu
Certificate of Analysis
You will get a certificate here
Go back
Log in or register to request a certificate of analysis.
Reviews 0
Read, write and discuss reviews... more
Close menu
Customer review for "Anti-RPC2"
Write a review
Log in or register to review a product.
Similar products
Similar products 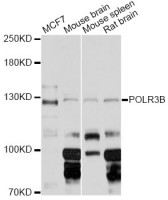 Anti-POLR3B
314.00€ *
Viewed
This website uses cookies, which are necessary for the technical operation of the website and are always set. Other cookies, which increase the usability of this website, serve for direct advertising or simplify interaction with other websites and social networks, will only be used with your consent. More information
Decline Accept all Configure