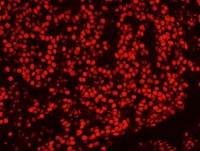 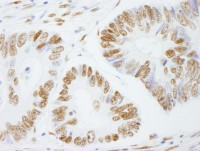 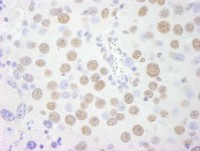 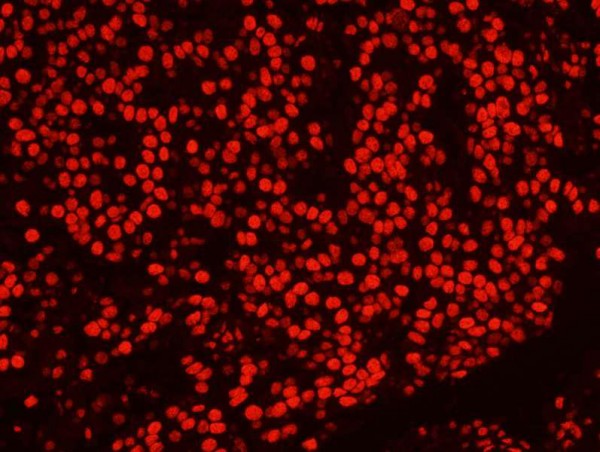 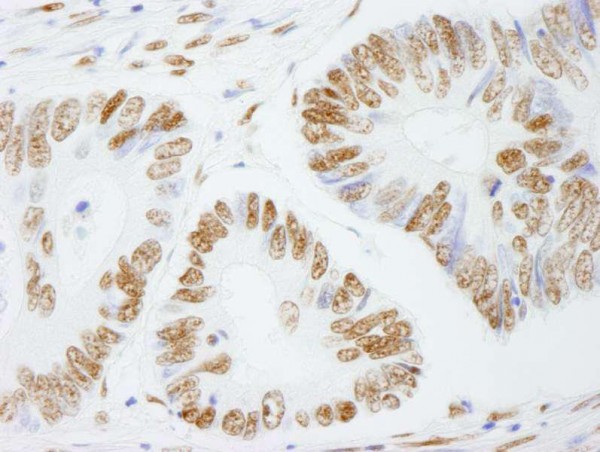 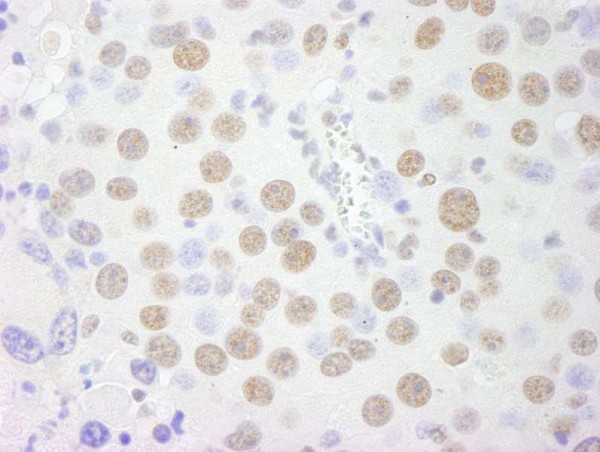 You can also order using info@biomol.com or FAX at 0049-40-85326022
Bigger quantity required? Request Bulk
Description Certificate of Analysis Reviews 0
Description
Protein function: DNA- and RNA binding protein, involved in several nuclear processes. Essential... more
Close menu
Product information "Anti-PSF/SFPQ (IHC)"
Protein function: DNA- and RNA binding protein, involved in several nuclear processes. Essential pre-mRNA splicing factor required early in spliceosome formation and for splicing catalytic step II, probably as a heteromer with NONO. Binds to pre-mRNA in spliceosome C complex, and specifically binds to intronic polypyrimidine tracts. Involved in regulation of signal-induced alternative splicing. During splicing of PTPRC/CD45, a phosphorylated form is sequestered by THRAP3 from the pre-mRNA in resting T-cells, T-cell activation and subsequent reduced phosphorylation is proposed to lead to release from THRAP3 allowing binding to pre-mRNA splicing regulatotry elements which represses exon inclusion. Interacts with U5 snRNA, probably by binding to a purine-rich sequence located on the 3' side of U5 snRNA stem 1b. May be involved in a pre-mRNA coupled splicing and polyadenylation process as component of a snRNP-free complex with SNRPA/U1A. The SFPQ-NONO heteromer associated with MATR3 may play a role in nuclear retention of defective RNAs. SFPQ may be involved in homologous DNA pairing, in vitro, promotes the invasion of ssDNA between a duplex DNA and produces a D-loop formation. The SFPQ-NONO heteromer may be involved in DNA unwinding by modulating the function of topoisomerase I/TOP1, in vitro, stimulates dissociation of TOP1 from DNA after cleavage and enhances its jumping between separate DNA helices. The SFPQ-NONO heteromer may be involved in DNA non-homologous end joining (NHEJ) required for double-strand break repair and V(D)J recombination and may stabilize paired DNA ends, in vitro, the complex strongly stimulates DNA end joining, binds directly to the DNA substrates and cooperates with the Ku70/G22P1-Ku80/XRCC5 (Ku) dimer to establish a functional preligation complex. SFPQ is involved in transcriptional regulation. Transcriptional repression is mediated by an interaction of SFPQ with SIN3A and subsequent recruitment of histone deacetylases (HDACs). The SFPQ-NONO-NR5A1 complex binds to the CYP17 promoter and regulates basal and cAMP-dependent transcriptional avtivity. SFPQ isoform Long binds to the DNA binding domains (DBD) of nuclear hormone receptors, like RXRA and probably THRA, and acts as transcriptional corepressor in absence of hormone ligands. Binds the DNA sequence 5'-CTGAGTC-3' in the insulin-like growth factor response element (IGFRE) and inhibits IGF-I-stimulated transcriptional activity. Regulates the circadian clock by repressing the transcriptional activator activity of the CLOCK-ARNTL/BMAL1 heterodimer. Required for the transcriptional repression of circadian target genes, such as PER1, mediated by the large PER complex through histone deacetylation. [The UniProt Consortium]

Caution
Our products are for laboratory research use only: Not for administration to humans!
Certificate of Analysis
You will get a certificate here
Go back
Log in or register to request a certificate of analysis.
Reviews 0
Read, write and discuss reviews... more
Close menu
Customer review for "Anti-PSF/SFPQ (IHC)"
Write a review
Log in or register to review a product.
Similar products
Similar products

PSF/SFPQ Antibody AbVantage(TM) Pack
924.00€ *
Viewed
This website uses cookies, which are necessary for the technical operation of the website and are always set. Other cookies, which increase the usability of this website, serve for direct advertising or simplify interaction with other websites and social networks, will only be used with your consent. More information
Decline Accept