You can also order using info@biomol.com or FAX at 0049-40-85326022
Bigger quantity required? Request Bulk
Description Certificate of Analysis Reviews 0
Description
0.2 mg/ml in 1X PBS with 0.1 mg/ml BSA (US sourced) and 0.05% sodium azide. Recognizes a protein... more
Close menu
Product information "Anti-N-Cadherin / CDH2, clone CDH2/1573"
0.2 mg/ml in 1X PBS with 0.1 mg/ml BSA (US sourced) and 0.05% sodium azide. Recognizes a protein of ~140kDa, identified as N-Cadherin (NCAD), also known as Cadherin 2, CDH2 and CD325. Cadherin 2 is a 140 kDa protein belonging to a family of transmembrane molecules that mediate calcium-dependent intercellular adhesion. Cadherins are involved in controlling morphogenetic movements during development and regulate cell surface adhesion through homotypic adhesion with the same cadherin species. Expression of Cadherin 2 has been reported on a variety of normal tissues including neuronal, endothelial and muscle cells, and a subpopulation of early hematopoietic progenitor cells. Results aid in the classification of malignant non-carcinomatous neoplasms including mesotheliomas, chordomas, synovial sarcomas, malignant melanomas, epithelioid sarcomas, epithelioid angiosarcomas, clear cell sarcomas as well as serous and endometrioid tumors of the ovary have been demonstrated to be Cadherin 2 positive, whereas mucinous tumors are negative. Other Cadherin 2-positive neoplasms include renal cell carcinomas and some variant breast tumors, including medullary breast carcinomas and sarcomatoid metaplastic breast carcinomas. Protein function: Cadherins are calcium-dependent cell adhesion proteins. They preferentially interact with themselves in a homophilic manner in connecting cells, cadherins may thus contribute to the sorting of heterogeneous cell types. Acts as a regulator of neural stem cells quiescence by mediating anchorage of neural stem cells to ependymocytes in the adult subependymal zone: upon cleavage by MMP24, CDH2-mediated anchorage is affected, leading to modulate neural stem cell quiescence. CDH2 may be involved in neuronal recognition mechanism. In hippocampal neurons, may regulate dendritic spine density. [The UniProt Consortium]

Caution
Our products are for laboratory research use only: Not for administration to humans!
Certificate of Analysis
You will get a certificate here
Go back
Log in or register to request a certificate of analysis.
Reviews 0
Read, write and discuss reviews... more
Close menu
Customer review for "Anti-N-Cadherin / CDH2, clone CDH2/1573"
Write a review
Log in or register to review a product.
Similar products
Similar products 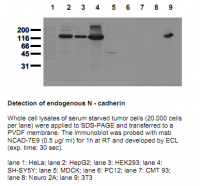 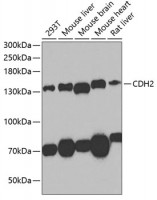 Anti-CDH2
314.00€ * 282.60€ *
Viewed
This website uses cookies, which are necessary for the technical operation of the website and are always set. Other cookies, which increase the usability of this website, serve for direct advertising or simplify interaction with other websites and social networks, will only be used with your consent. More information
Decline Accept all Configure