You can also order using info@biomol.com or FAX at 0049-40-85326022
Bigger quantity required? Request Bulk
Description Certificate of Analysis Reviews 0
Description
0.2 mg/ml in 1X PBS with 0.1 mg/ml BSA (US sourced) and 0.05% sodium azide. FOXA1 is a member of... more
Close menu
Product information "Anti-FOXA1, clone FOXA1/1512"
0.2 mg/ml in 1X PBS with 0.1 mg/ml BSA (US sourced) and 0.05% sodium azide. FOXA1 is a member of the forkhead class of DNA-binding proteins. These hepatocyte nuclear factors are transcriptional activators for liver-specific transcripts such as albumin and transthyretin, and they also interact with chromatin as a pioneer factor. Similar family members in mice have roles in the regulation of metabolism and in the differentiation of the pancreas and liver.FOXA1 in breast cancer is highly correlated with ERalpha+, GATA3+, and PR+ protein expression as well as endocrine signaling. FOXA1 acts as a pioneer factor for ERa in ERalpha+ breast cancer, and its expression might identify ERalpha+ cancers that undergo rapid reprogramming of ERa signaling that is associated with poor outcomes and treatment resistance. Conversely, in ERalpha?, breast cancer FOXA1 is highly correlated with low-grade morphology and improved disease free survival. FOXA1 is a downstream target of GATA3 in the mammary gland. Expression in ERalpha?, cancers may identify a subset of tumors that is responsive to other endocrine therapies such as androgen receptor antagonist treatment. [Wiki] Protein function: Transcription factor that is involved in embryonic development, establishment of tissue-specific gene expression and regulation of gene expression in differentiated tissues. Is thought to act as a 'pioneer' factor opening the compacted chromatin for other proteins through interactions with nucleosomal core histones and thereby replacing linker histones at target enhancer and/or promoter sites. Binds DNA with the consensus sequence 5'-[AC]A[AT]T[AG]TT[GT][AG][CT]T[CT]-3'. Proposed to play a role in translating the epigenetic signatures into cell type-specific enhancer-driven transcriptional programs. Its differential recruitment to chromatin is dependent on distribution of histone H3 methylated at 'Lys-5' (H3K4me2) in estrogen-regulated genes. Involved in the development of multiple endoderm-derived organ systems such as liver, pancreas, lung and prostate, FOXA1 and FOXA2 seem to have at least in part redundant roles. Modulates the transcriptional activity of nuclear hormone receptors. Is involved in ESR1-mediated transcription, required for ESR1 binding to the NKX2-1 promoter in breast cancer cells, binds to the RPRM promoter and is required for the estrogen-induced repression of RPRM. Involved in regulation of apoptosis by inhibiting the expression of BCL2. Involved in cell cycle regulation by activating expression of CDKN1B, alone or in conjunction with BRCA1. Originally described as a transcription activator for a number of liver genes such as AFP, albumin, tyrosine aminotransferase, PEPCK, etc. Interacts with the cis-acting regulatory regions of these genes. Involved in glucose homeostasis. [The UniProt Consortium] 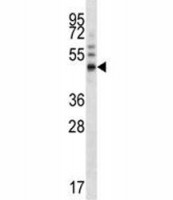 Anti-FOXA1, clone rFOXA1/1515
541.00€ *
Viewed
This website uses cookies, which are necessary for the technical operation of the website and are always set. Other cookies, which increase the usability of this website, serve for direct advertising or simplify interaction with other websites and social networks, will only be used with your consent. More information
Decline Accept all Configure