You can also order using info@biomol.com or FAX at 0049-40-85326022
Bigger quantity required? Request Bulk
Description Product Citations Certificate of Analysis Reviews 0
Description
0.5mg/ml if reconstituted with 0.2ml sterile DI water. Early growth response protein 1, also... more
Close menu
Product information "Anti-EGR1"
0.5mg/ml if reconstituted with 0.2ml sterile DI water. Early growth response protein 1, also known as ZIF268 or NGFIA, is a protein that in humans is encoded by the EGR1 gene. The protein encoded by this gene belongs to the EGR family of C2H2-type zinc-finger proteins. This gene is mapped to 5q31.2. It is a nuclear protein and functions as a transcriptional regulator. The products of target genes it activates are required for differentitation and mitogenesis. Studies suggest this is a cancer suppresor gene. It has a distinct pattern of expression in the brain, and its induction has been shown to be associated with neuronal activity. Several studies suggest it has a role in neuronal plasticity. Protein function: Transcriptional regulator (PubMed:20121949). Recognizes and binds to the DNA sequence 5'-GCG(T/G)GGGCG-3'(EGR-site) in the promoter region of target genes. Binds double- stranded target DNA, irrespective of the cytosine methylation status (PubMed:25258363, PubMed:25999311). Regulates the transcription of numerous target genes, and thereby plays an important role in regulating the response to growth factors, DNA damage, and ischemia. Plays a role in the regulation of cell survival, proliferation and cell death. Activates expression of p53/TP53 and TGFB1, and thereby helps prevent tumor formation. Required for normal progress through mitosis and normal proliferation of hepatocytes after partial hepatectomy. Mediates responses to ischemia and hypoxia, regulates the expression of proteins such as IL1B and CXCL2 that are involved in inflammatory processes and development of tissue damage after ischemia. Regulates biosynthesis of luteinizing hormone (LHB) in the pituitary. [The UniProt Consortium]

Caution
Our products are for laboratory research use only: Not for administration to humans!
Product Citations
Information about the product reference will follow. more
Close menu
Certificate of Analysis
You will get a certificate here
Go back
Log in or register to request a certificate of analysis.
Reviews 0
Read, write and discuss reviews... more
Close menu
Customer review for "Anti-EGR1"
Write a review
Log in or register to review a product.
Similar products
Similar products 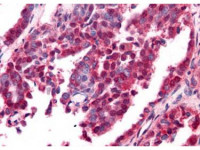 Anti-EGR1
From 63.00€ *
Viewed
This website uses cookies, which are necessary for the technical operation of the website and are always set. Other cookies, which increase the usability of this website, serve for direct advertising or simplify interaction with other websites and social networks, will only be used with your consent. More information
Decline Accept all Configure