You can also order using info@biomol.com or FAX at 0049-40-85326022
Bigger quantity required? Request Bulk
Description Certificate of Analysis Reviews 0
Description
0.2 mg/ml with 0.1 mg/ml BSA (US sourced), 0.05% sodium azide. Expression of DOG-1 protein is... more
Close menu
Product information "Anti-DOG-1, clone DOG-1.1"
0.2 mg/ml with 0.1 mg/ml BSA (US sourced), 0.05% sodium azide. Expression of DOG-1 protein is elevated in the gastrointestinal stromal tumors (GISTs), c-kit signaling-driven mesenchymal tumors of the GI tract. DOG-1 is rarely expressed in other soft tissue tumors, which, due to appearance, may be difficult to diagnose. Immunoreactivity for DOG-1 has been reported in 97.8 percent of scorable GISTs, including all c-kit negative GISTs. Overexpression of DOG-1 has been suggested to aid in the identification of GISTs, including Platelet-Derived Growth Factor Receptor Alpha mutants that fail to express c-kit antigen. The overall sensitivity of DOG1 and c-kit in GISTs is nearly identical: 94.4% vs. 94.7%. Protein function: Calcium-activated chloride channel (CaCC) which plays a role in transepithelial anion transport and smooth muscle contraction. Required for the normal functioning of the interstitial cells of Cajal (ICCs) which generate electrical pacemaker activity in gastrointestinal smooth muscles. Acts as a major contributor to basal and stimulated chloride conductance in airway epithelial cells and plays an important role in tracheal cartilage development. [The UniProt Consortium] 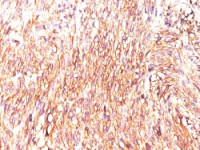 Anti-DOG1, clone DOG1.1
439.00€ *
Viewed
This website uses cookies, which are necessary for the technical operation of the website and are always set. Other cookies, which increase the usability of this website, serve for direct advertising or simplify interaction with other websites and social networks, will only be used with your consent. More information
Decline Accept all Configure