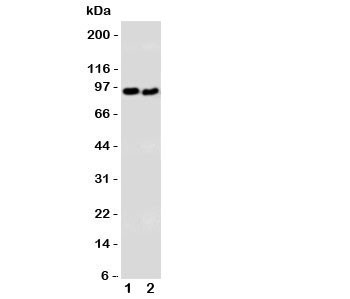 You can also order using info@biomol.com or FAX at 0049-40-85326022
Bigger quantity required? Request Bulk
Description Product Citations Certificate of Analysis Reviews 0
Description
0.5mg/ml if reconstituted with 0.2ml sterile DI water. Disrupted in Schizophrenia 1 is a protein... more
Close menu
Product information "Anti-DISC1"
0.5mg/ml if reconstituted with 0.2ml sterile DI water. Disrupted in Schizophrenia 1 is a protein that is encoded by the DISC1 gene in humans. Ma et al.(2002) determined that the mouse gene maps to chromosome 8 in a region with homology of synteny to human chromosome 1q42. Ozeki et al.(2003) demonstrated that rodent Disc1 expression displayed pronounced developmental regulation, with the highest levels in late embryonic life during development of the cerebral cortex. Millar et al.(2005) showed that the protein interacts with the UCR2 domain of phosphodiesterase-4B, implicated in susceptibility to schizophrenia, and that elevation of cellular cAMP leads to dissociation of PDE4B from DISC1 and in increase in PDE4B activity. Protein function: Involved in the regulation of multiple aspects of embryonic and adult neurogenesis. Required for neural progenitor proliferation in the ventrical/subventrical zone during embryonic brain development and in the adult dentate gyrus of the hippocampus. Participates in the Wnt-mediated neural progenitor proliferation as a positive regulator by modulating GSK3B activity and CTNNB1 abundance. Plays a role as a modulator of the AKT-mTOR signaling pathway controlling the tempo of the process of newborn neurons integration during adult neurogenesis, including neuron positioning, dendritic development and synapse formation. Inhibits the activation of AKT-mTOR signaling upon interaction with CCDC88A. Regulates the migration of early-born granule cell precursors toward the dentate gyrus during the hippocampal development. Plays a role, together with PCNT, in the microtubule network formation. [The UniProt Consortium] 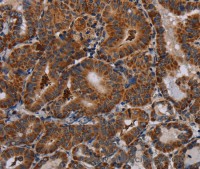 Anti-DISC1
From 63.00€ *
Viewed
This website uses cookies, which are necessary for the technical operation of the website and are always set. Other cookies, which increase the usability of this website, serve for direct advertising or simplify interaction with other websites and social networks, will only be used with your consent. More information
Decline Accept all Configure