You can also order using info@biomol.com or FAX at 0049-40-85326022
Bigger quantity required? Request Bulk
Description Certificate of Analysis Reviews 0
Description
Prediluted in 1X PBS, 0.1 mg/ml BSA (US sourced), 0.05% sodium azide, *For IHC use only*. CD31... more
Close menu
Product information "Anti-CD31, clone JC/70A"
Prediluted in 1X PBS, 0.1 mg/ml BSA (US sourced), 0.05% sodium azide, *For IHC use only*. CD31 (PECAM-1) is a transmembrane glycoprotein member of the immunoglobulin supergene family of adhesion molecules. CD31 is expressed by stem cells of the hematopoietic system and is primarily used to identify and concentrate these cells for experimental studies as well as for bone marrow transplantation. Anti-CD31 has shown to be highly specific and sensitive for vascular endothelial cells. Staining of nonvascular tumors (excluding hematopoietic neoplasms) is rare. CD31 mAb reacts with normal, benign, and malignant endothelial cells which make up blood vessel lining. The level of CD31 expression can help to determine the degree of tumor angiogenesis, and a high level of CD31 expression may imply a rapidly growing tumor and potentially a predictor of tumor recurrence. Protein function: Induces susceptibility to atherosclerosis. Cell adhesion molecule which is required for leukocyte transendothelial migration (TEM) under most inflammatory conditions. Tyr-690 plays a critical role in TEM and is required for efficient trafficking of PECAM1 to and from the lateral border recycling compartment (LBRC) and is also essential for the LBRC membrane to be targeted around migrating leukocytes. Prevents phagocyte ingestion of closely apposed viable cells by transmitting 'detachment' signals, and changes function on apoptosis, promoting tethering of dying cells to phagocytes (the encounter of a viable cell with a phagocyte via the homophilic interaction of PECAM1 on both cell surfaces leads to the viable cell's active repulsion from the phagocyte. During apoptosis, the inside-out signaling of PECAM1 is somehow disabled so that the apoptotic cell does not actively reject the phagocyte anymore. The lack of this repulsion signal together with the interaction of the eat-me signals and their respective receptors causes the attachment of the apoptotic cell to the phagocyte, thus triggering the process of engulfment). Isoform Delta15 is unable to protect against apoptosis. Modulates BDKRB2 activation. Regulates bradykinin- and hyperosmotic shock-induced ERK1/2 activation in human umbilical cord vein cells (HUVEC). [The UniProt Consortium] 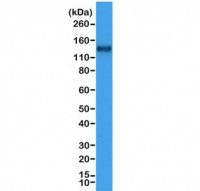 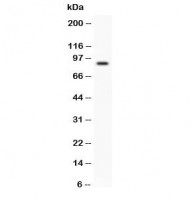 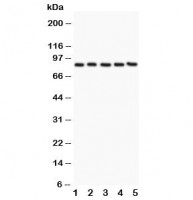 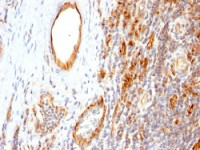 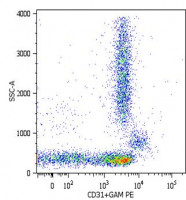 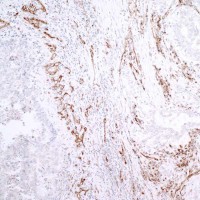 Anti-CD31 (IHC)
From 125.00€ *
Viewed
This website uses cookies, which are necessary for the technical operation of the website and are always set. Other cookies, which increase the usability of this website, serve for direct advertising or simplify interaction with other websites and social networks, will only be used with your consent. More information
Decline Accept all Configure