You can also order using info@biomol.com or FAX at 0049-40-85326022
Bigger quantity required? Request Bulk
Description Product Citations Certificate of Analysis Reviews 0
Description
0.2 mg/ml in 1X PBS with 0.1 mg/ml BSA (US sourced) and 0.05% sodium azide. It recognizes a... more
Close menu
Product information "Anti-Calnexin, clone CANX/1541"
0.2 mg/ml in 1X PBS with 0.1 mg/ml BSA (US sourced) and 0.05% sodium azide. It recognizes a protein of 90kDa, which is identified as Calnexin. Secretory and transmembrane proteins are synthesized on polysomes and translocate into the endoplasmic reticulum (ER) where they are often modified by the formation of disulfide bonds, amino-linked glycosylation and folding. To help proteins fold properly, the ER contains a pool of molecular chaperones including calnexin. It is a calcium-binding, endoplasmic reticulum (ER)-associated protein that interacts transiently with newly synthesized N-linked glycoproteins, facilitating protein folding and assembly. It may also play a central role in the quality control of protein folding by retaining incorrectly folded protein subunits within the ER for degradation. Protein function: Calcium-binding protein that interacts with newly synthesized glycoproteins in the endoplasmic reticulum. It may act in assisting protein assembly and/or in the retention within the ER of unassembled protein subunits. It seems to play a major role in the quality control apparatus of the ER by the retention of incorrectly folded proteins. Associated with partial T-cell antigen receptor complexes that escape the ER of immature thymocytes, it may function as a signaling complex regulating thymocyte maturation. Additionally it may play a role in receptor- mediated endocytosis at the synapse. [The UniProt Consortium]

Caution
Our products are for laboratory research use only: Not for administration to humans!
Product Citations
Information about the product reference will follow. more
Close menu
Certificate of Analysis
You will get a certificate here
Go back
Log in or register to request a certificate of analysis.
Reviews 0
Read, write and discuss reviews... more
Close menu
Customer review for "Anti-Calnexin, clone CANX/1541"
Write a review
Log in or register to review a product.
Similar products
Similar products 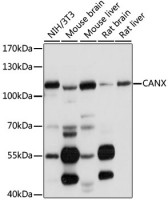 Anti-Calnexin, clone CANX/1543
From 263.00€ *
Viewed
This website uses cookies, which are necessary for the technical operation of the website and are always set. Other cookies, which increase the usability of this website, serve for direct advertising or simplify interaction with other websites and social networks, will only be used with your consent. More information
Decline Accept all Configure