You can also order using info@biomol.com or FAX at 0049-40-85326022
Bigger quantity required? Request Bulk
Description Certificate of Analysis Reviews 0
Description
Prediluted in 1X PBS, 0.1 mg/ml BSA (US sourced), 0.05% sodium azide, *For IHC use only*.... more
Close menu
Product information "Anti-Caldesmon Cocktail (CAD), clone CALD1/820 + h-CALD"
Prediluted in 1X PBS, 0.1 mg/ml BSA (US sourced), 0.05% sodium azide, *For IHC use only*. Recognizes a protein of 150kDa, which is identified as the high molecular weight variant of Caldesmon. Two closely related variants of human caldesmon have been identified which are different in their electrophoretic mobility and cellular distribution. The h-caldesmon variant (120-150kDa) is predominantly expressed in smooth muscle whereas l-caldesmon (70-80kDa) is found in non- muscle tissue and cells. Neither of the two variants has been detected in skeletal muscle. This mAb recognizes only the 150kDa variant (h-caldesmon) in Western blots of human aortic media extracts and is unreactive with fibroblast extracts from cultivated human foreskin. Caldesmon is a developmentally regulated protein involved in smooth muscle and non-muscle contraction. Protein function: Actin- and myosin-binding protein implicated in the regulation of actomyosin interactions in smooth muscle and nonmuscle cells (could act as a bridge between myosin and actin filaments). Stimulates actin binding of tropomyosin which increases the stabilization of actin filament structure. In muscle tissues, inhibits the actomyosin ATPase by binding to F-actin. This inhibition is attenuated by calcium-calmodulin and is potentiated by tropomyosin. Interacts with actin, myosin, two molecules of tropomyosin and with calmodulin. Also play an essential role during cellular mitosis and receptor capping. Involved in Schwann cell migration during peripheral nerve regeneration. [The UniProt Consortium]

Caution
Our products are for laboratory research use only: Not for administration to humans!
Certificate of Analysis
You will get a certificate here
Go back
Log in or register to request a certificate of analysis.
Reviews 0
Read, write and discuss reviews... more
Close menu
Customer review for "Anti-Caldesmon Cocktail (CAD), clone CALD1/820 + h-CALD"
Write a review
Log in or register to review a product.
Similar products
Similar products
+ FREE T-Shirt 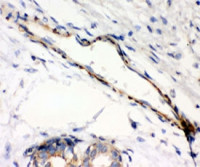 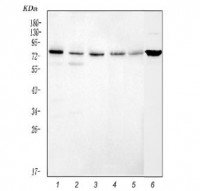 Caldesmon Antibody AbVantage(TM) Pack
924.00€ *
Viewed
This website uses cookies, which are necessary for the technical operation of the website and are always set. Other cookies, which increase the usability of this website, serve for direct advertising or simplify interaction with other websites and social networks, will only be used with your consent. More information
Decline Accept all Configure