​Cannabis: Our Key to the Endocannabinoid System 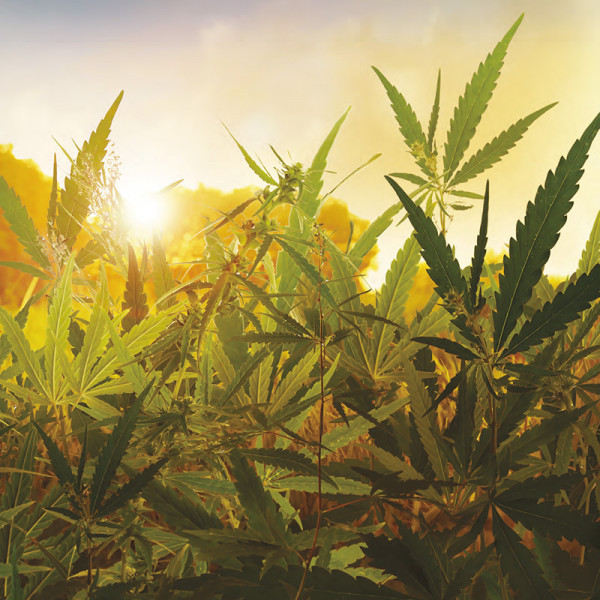 The Cannabis sativa plant has seen a tremendous amount of notoriety over the last few years due to an increasing support of legalization. After a decade-long prohibition, researchers, doctors, and legislatures are beginning to peel back the uncertainty of one of civilization’s oldest plant companions.1 Cannabis has been recreationally and medicinally consumed farther back than recorded history. Although today, we still know very little about it. Its powers come from the ability of the chemical constituents to activate and affect the endocannabinoid system (ECS), a homeostatic regulatory system unique to the phylum Chordata.1 Today, Cannabis is used in a variety of countries worldwide, but due to restricted access to research, our understanding of its therapeutic potential and limitations are not fully realized. Over the last few decades, more inquiries have been made in understanding the ECS and Cannabis’ role as a therapeutic agent, and although beneficial for numerous therapeutic scenarios, there are indications that its efficacy is not consistent across all disease types.

Cannabis is the evolutionary byproduct of a plant that evolved to affect the ECS, a biological system of receptors, ligands, and enzymes stemming back to aquatic species 400 million years before the arrival of plants and trees.2 The human body is constantly producing endogenous cannabinoids—endocannabinoids. In the lab, Cannabis led us to the ECS, but in nature the ECS was responsible for Cannabis.

Cannabis is a mixture of over 500 compounds.3 Most notable are compounds from three categories: phytocannabinoids (such as Δ9-THC and CBD), terpenoids, and flavonoids.3 Phytocannabinoids like Δ9-THC and CBD affect the body through their activities on G protein-coupled receptors such as cannabinoid receptor 1 (CB1) and cannabinoid receptor 2 (CB2) as well as GPR55. Although, there is growing evidence for related receptors affected by cannabinoids such as the transient receptor potential (TRP) channels and peroxisome proliferator-activated receptors (PPARs) that has largely gone unnoticed by the general public (Figure 1).1 Both TRP and PPAR receptors have a pronounced role in many bioregulatory pathways. For example, TRPV1 is notorious for its role in the regulation of body temperature as well as the sensations of heat and pain. PPARγ is expressed in almost all tissues and is essential for pathways involved in cellular differentiation and development.

In vivo and in vitro evidence has demonstrated isolated cannabinoids’ and whole Cannabis extract’s ability to induce apoptosis in cancerous cells and act as a therapeutic agent in other chronic diseases.4 Multiple pharmaceuticals containing cannabinoids or synthetic cannabinoid compounds have been released. The most recent one, Epidiolex®, is the first FDA-approved Cannabis-derived pharmaceutical containing just one active ingredient: CBD derived from Cannabis. Many states and countries are beginning to open medical marijuana programs, but our understanding of Cannabis’ effects is a much simpler view than the actual reality.

The most glaring observations: whole Cannabis extracts work more effectively than isolated cannabinoids, and not every Cannabis variety, or chemovar, is created equally. These two observations are due to a phenomenon known as the ‘entourage effect,’ which is created when cannabinoids and other Cannabis compounds, such as terpenoids and flavonoids or other cannabinoids, are found in the presence of one another to create a potentially varied effect.3 Its mechanisms are not fully understood and the major bioactive compounds inside of Cannabis have yet to be fully pinpointed, but due to different genetics and growth conditions, multiple varieties exist leading to a multitude of different possible outcomes. The varied ability of Cannabis chemovars was identified in a screening using a collection of 12 different whole Cannabis extracts for their ability to induce cell death in cancerous cell lines (Figure 2). In the three cases shown in the figure, a few clear points can be made, namely that not every tissue type is affected by Cannabis, not every chemovar is created equal, and in some cases, the chemovars best at inducing cell death in one cancer type were ineffective with others.

Figure 2: Cell viability of three cancerous cells against 4 μg/ml of 12 whole Cannabis extracts of varying cannabinoid concentrations after 24 hours of treatment as described in Baram, et al.5 Image used under CC BY 3.0.

This can be further highlighted in a comparative study focusing on one of the major bioactive compounds in Cannabis, Δ9-THC. In an in vitro study using 14 extracts containing at least 18% Δ9-THC and purified Δ9-THC, it was found that the whole Cannabis extracts were better at inducing cell death in A549 cancerous lung cells (Figure 3). After 24 hours, 4 μg/ml of extract was enough to induce cell death with several extracts. Of the 14 extracts tested, three were able to bring cancerous cell levels down at least 50%, one of which achieved 80% cell death. This is in direct contrast with the performance of purified Δ9-THC. Additionally, Δ9-THC content in the high Δ9-THC extracts did not seem to correlate to its performance, indicating an increased activity from additional bioactive compounds. 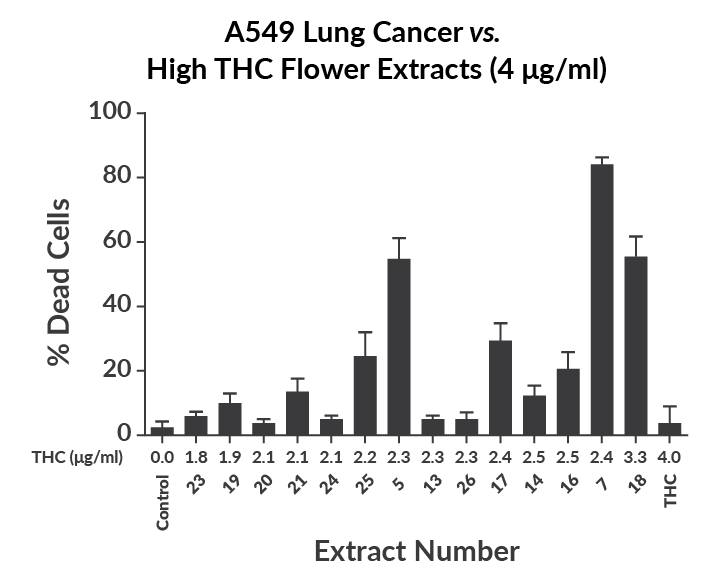 Figure 3: Cell viability of A549 lung cancer cells against 4 μg/ml of 14 high Δ9-THC whole Cannabis extracts after 24 hours of treatment as described in Baram, et al.5 Image used under CC BY 3.0.

The same trends can be seen using high CBD plants. In an in vivo investigation, five high CBD plants with roughly the same concentration of CBD and Δ9-THC (50% and 2%, respectively) were investigated for their therapeutic ability to treat symptoms of epilepsy (Figure 4). All five extracts were roughly the same in what would be considered their major bioactive compounds, Δ9-THC and CBD, but their outcomes were extremely varied. Currently throughout the world, the testing of the concentration of compounds inside of Cannabis only covers a fraction of the entire plant. Most regulatory groups only require the Δ9-THC and CBD levels to be publicly addressed, while biological studies show there is in fact much more involved.

The therapeutic potential of Cannabis and its constituents will never be fully realized until bioactive compounds are identified, or more in-depth testing is commonplace. Additionally, the scope of our outlook on the ECS is limiting. When observing outcomes strictly based on interactions with CB1 and CB2, we are ignoring the actual basis for mechanisms. Of the cancerous cell lines noted by Baram, et al., two that were susceptible to Cannabis had no detectable expression of CB1 or CB2 (Figure 5).5 LNCaP had neither CB1, CB2, nor GPR55 (Figure 5). 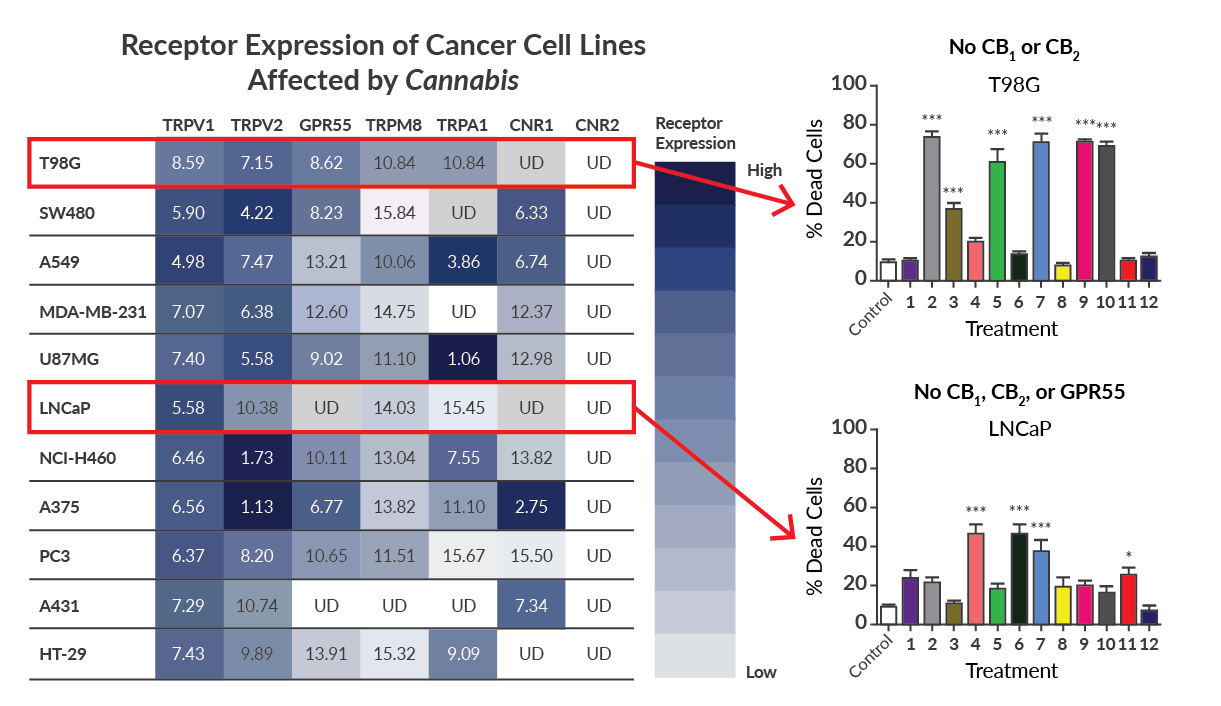 Figure 5: Cannabimimetic receptors TRPV1, TRPV2, GPR55, TRPM8, and TRPA1 along with CNR1 (CB1) and CNR2 (CB2) mRNA levels were evaluated by qPCR. Expression levels were represented as ΔCT levels of the receptors as described in Baram, et al.5 UD - under detectable level. Image used under CC BY 3.0.

The utilization of Cannabis has a long way to go before reaching perfection, but it does contain compounds that make promising therapeutic agents for certain conditions. With a wider view of the ECS beyond just CB1 and CB2, and an understanding that a chemovar’s abilities are outside of just Δ9-THC and CBD, we would be better able to address and manipulate cannabinoid-based therapies.

Tags: Cayman Chemical, Phytocannabinoids
This website uses cookies, which are necessary for the technical operation of the website and are always set. Other cookies, which increase the usability of this website, serve for direct advertising or simplify interaction with other websites and social networks, will only be used with your consent. More information
Decline Accept all Configure