Obesity represents one of the biggest global health problems. To date, lifestyle changes (diet and exercise) have been a major part of the treatment of obesity. With the addition of the diabetes drug semaglutide, a pharmacological therapy option could now be used to effectively reduce weight, a new study suggests.

Hope for the Treatment of Obesity

Semaglutide is an active ingredient approved as a treatment for type 2 diabetes in the EU in 2018. It is a glucagon-like peptide (GLP-1) agonist, which binds to the GLP-1 receptor. Binding of semaglutide to this receptor results in several pharmacological effects that are important in the treatment of diabetes. These include promoting glucose-dependent insulin secretion by pancreatic beta cells, decreasing gluconeogenesis by the liver, and slowing gastric emptying [1].  During clinical trials of semaglutide in patients with type 2 diabetes, it was noticed that patients showed a significant reduction in body weight after injection with the drug in combination with changes in relevant lifestyle habits (diet and exercise).

To examine weight loss with semaglutide in nondiabetics, Kushner et al. [2]  conducted a double-blind study of 1961 adult participants. Subjects had either a body mass index of 30 and above or at least 27 with weight-related comorbidities, not including diabetes. Study participants were divided in a 2:1 ratio and received 2.5 mg of semaglutide subcutaneously, or the placebo, once weekly for 68 weeks. Additionaly, lifestyle changes were made (500kcal less per day and 150 minutes of physical activity such as walking). After 68 weeks, there was a break without the administration of semaglutide and without the lifestyle changes. 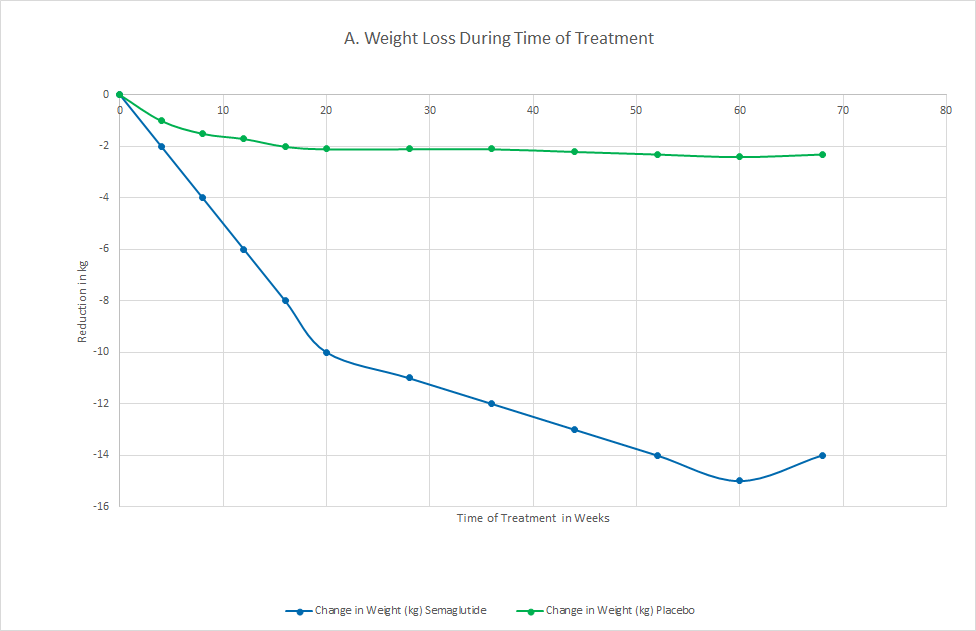 Fig.1: The average weight loss of the participants after the study duration of 68 weeks was 14.9% in the semaglutide group and 2.4% in the placebo group. Adapted from Kushner et al.

Fig.2: A weight reduction of at least 5% was achieved by 92.4% of participants from the semaglutide group whereas only 33.1% from the placebo group achieved the same reduction. The proportion of greater weight loss was also significantly higher in the semaglutide group (e.g., weight reduction of more than 20% in nearly 35% subjects compared with 2% in the control group). Adapted from Kushner et al.

Only Few Side Effects So Far

Compared with the improvement in multiple parameters (blood lipid levels, hypertension, etc.), few negative side effects have been observed in the study by Kushner et al. The most common were gastrointestinal symptoms such as nausea and vomiting. These symptoms were predominantly mild. More severe side effects occurred in 9.8% of subjects (compared to 6.4% in the control group). These side effects are already known from previous studies. A special feature of the drug is its half-life. Semaglutide only needs to be injected subcutaneously once a week to achieve the desired effect. However, to obtain the positive effect studied by Kushner et al. the drug would most likely need to be applied throughout the patient´s life.

A reliable and effective reduction of body weight is the main goal in the treatment of obesity. To date, there are few drugs that can effectively help with weight loss. The research approaches to adressing this need are diverse. While a large branch of research focuses on the genetic component of obesity, intensive research is being done in the field of adipogenesis. The different phases of the cell cycle, as well as specific growth factors and inhibitors represent potential targets for active compounds. The intersection between obesity/cancer and obesity/inflammatory disease research is also of great importance. It is estimated that approximately 1.9 billion adults worldwide suffer from obesity. In the EU alone, up to 61.5% of the population is likely to be overweight, according to Eurostat data [3]. High levels of obesity and the associated consequences pose both a personal and a public health risk underscoring the need for further research.

Semaglutide (acetate)
From 58.00€ *
This website uses cookies, which are necessary for the technical operation of the website and are always set. Other cookies, which increase the usability of this website, serve for direct advertising or simplify interaction with other websites and social networks, will only be used with your consent. More information
Decline Accept all Configure