You can also order using info@biomol.com or FAX at 0049-40-85326022
Bigger quantity required? Request Bulk
Description Product Citations Certificate of Analysis Reviews 0
Description
Greater than 95% specific peptide. The nucleosome is comprised of 146 bp of DNA wrapped around a... more
Close menu
Product information "Histone H3, 1-18 K4Me2/K9/K14ac Peptide"
Greater than 95% specific peptide. The nucleosome is comprised of 146 bp of DNA wrapped around a series of histone proteins arranged as an octamer consisting of 2 copies of histone H2A, H2B, H3 and H4. Within the nucleosome core the histone proteins are covalent modified at specific residues predominantly within the N-terminal tail including lysine (acetylation, methylation, SUMOylation, and ubiquitinylation), arginine methylation and citrullination, serine and threonine phosphorylation, as well as proline isomerization. The lysine side chains can carry up to three methyl groups (mono-, di- and tri- methylated forms) and the arginine side chain can be monomethylated or can be dimethylated as the symmetric or asymmetric forms. The modifications show temporal, disease-specific, and other types of cell-specific regulation and there are specific families of enzymes that regulate the methylation, demethylation, acetylation, deacetylation and other modifications. Research has indicated that whereas the histone mark H3K4Me3 (tri-methyl lysine 4 of histone H3) localizes to gene promoter regions (it is associated with transcriptional activation) other modifications at H3K4 such as monomethyl is present predominantly at enhancer sequences. Specific marks have been shown to be associated with the activation (H3K9Me1, H3K27Me1, and H4K20Me1) or repression (H3K9Me2 and Me3, H3K27Me2 and Me3, and H4K20Me2 and Me3) of genes. Monomethylation of H4 at K20, catalyzed by SET8, is essential to genome replication and stability. Multiple DNA breaks are associated with demethylation at this site, resulting in activation of p53 to avoid mitosis and aberrant chromosomal activity. In mammalian stem cells, Xist expression blocks the formation of H4K20me1, which is one of the first examples of a direct connection between chromatin and stem cell differentiation. Histone H3 are ideal for researchers interested in Chromatin Research, Epigenetics, Chromatin Modifiers, Histones and Modified Histones, and Phospho Specific research.

Caution
Our products are for laboratory research use only: Not for administration to humans!
Product Citations
Information about the product reference will follow. more
Close menu
Certificate of Analysis
You will get a certificate here
Go back
Log in or register to request a certificate of analysis.
Reviews 0
Read, write and discuss reviews... more
Close menu
Customer review for "Histone H3, 1-18 K4Me2/K9/K14ac Peptide"
Write a review
Log in or register to review a product.
Similar products
Similar products 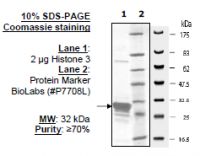 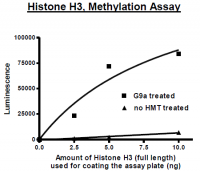 Histone H3, full length, recombinant protein, N-terminal...
587.00€ *
Viewed
This website uses cookies, which are necessary for the technical operation of the website and are always set. Other cookies, which increase the usability of this website, serve for direct advertising or simplify interaction with other websites and social networks, will only be used with your consent. More information
Decline Accept all Configure