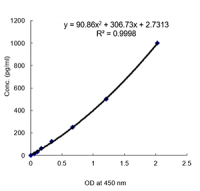 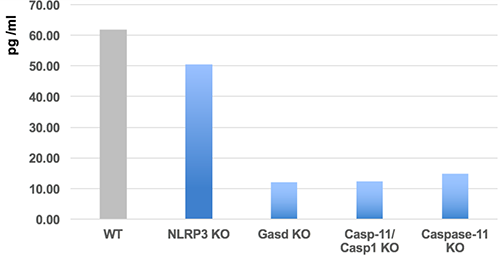 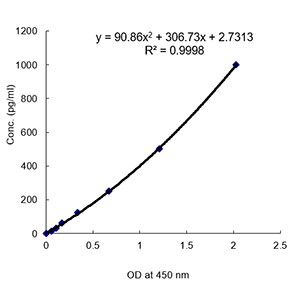 Detects full-length and cleaved mouse Gasdermin D (C-terminus) in cell culture supernatants and cell extracts. Does not cross-react with human gasdermin D. Sensitivity: 14pg/ml. Range: 15.6 to 1000pg/ml. Protein function: Gasdermin-D, N-terminal: Promotes pyroptosis in response to microbial infection and danger signals. Produced by the cleavage of gasdermin-D by inflammatory caspases CASP1 or CASP4 in response to canonical, as well as non-canonical (such as cytosolic LPS) inflammasome activators (PubMed:26611636, PubMed:26375259, PubMed:26375003, PubMed:27418190, PubMed:27385778, PubMed:27383986). After cleavage, moves to the plasma membrane where it strongly binds to membrane inner leaflet lipids, including monophosphorylated phosphatidylinositols, such as phosphatidylinositol 4-phosphate, bisphosphorylated phosphatidylinositols, such as phosphatidylinositol (4,5)- bisphosphate, as well as phosphatidylinositol (3,4,5)- trisphosphate, and more weakly to phosphatidic acid and phosphatidylserine. Homooligomerizes within the membrane and forms pores of 10 - 15 nanometers (nm) of inner diameter, allowing the release of mature IL1B and triggering pyroptosis. Exhibits bactericidal activity. Gasdermin-D, N-terminal released from pyroptotic cells into the extracellular milieu rapidly binds to and kills both Gram-negative and Gram-positive bacteria, without harming neighboring mammalian cells, as it does not disrupt the plasma membrane from the outside due to lipid-binding specificity. Under cell culture conditions, also active against intracellular bacteria, such as Listeria monocytogenes. Strongly binds to bacterial and mitochondrial lipids, including cardiolipin. Does not bind to phosphatidylethanolamine or phosphatidylcholine (PubMed:27383986). [The UniProt Consortium] Inflammasomes are multimeric protein complexes that comprise a sensor (e.g. NLRP3), an adaptor (ASC/Pycard) and the procaspase-1. An inflammasome assembles in response to a diverse range of pathogen-associated or danger-associated molecular patterns (PAMPs or DAMPs). The inflammasome platform leads to activation of caspase-1, which further induces maturation of interleukin-1beta and -18 (IL-1beta and IL-18) through proteolytic cleavage of pro-IL-1beta and pro-IL-18. Activated caspase-1, and also the recently characterized caspase-11 non-canonical inflammasome pathway, also cleave the intracellular gasdermin D, which leads to a particular form of inflammatory cell death called pyroptosis. The gasdermin family members contain N-terminal domains that are capable of forming membrane pores to induce cytolysis, whereas the C-terminal domains of gasdermins function as inhibitors of such cytolysis through intramolecular domain association. Caspase-1 or -11 cleavage of gasdermin D is required for regulation of pyroptosis: upon protease cleavage of the gasdermin N- and C-domain linker, the disruption of the intramolecular domain interaction in the presence of lipids releases the N-domain to assemble oligomeric membrane pores that trigger cell death. Gasdermin D seems to be a key effector in the LPS-induced lethal sepsis.

Caution
Our products are for laboratory research use only: Not for administration to humans!
Certificate of Analysis
You will get a certificate here
Go back
Log in or register to request a certificate of analysis.
Reviews 0
Read, write and discuss reviews... more
Close menu
Customer review for "Gasdermin D (mouse) ELISA Kit"
Write a review
Log in or register to review a product.
Viewed
This website uses cookies, which are necessary for the technical operation of the website and are always set. Other cookies, which increase the usability of this website, serve for direct advertising or simplify interaction with other websites and social networks, will only be used with your consent. More information
Decline Accept