Bestellen Sie auch per E-Mail info@biomol.com oder FAX: 0049-40-85326022
Größere Menge gewünscht? Bulk-Anfrage
Beschreibung Analysenzertifikat Bewertungen 0
Beschreibung
Ion channels are integral membrane proteins that help establish and control the small voltage... mehr
Menü schließen
Produktinformationen "Anti-GABA Receptor A, delta (Gamma-aminobutyric Acid Receptor Type A delta Subunit, GABRAd)"
Ion channels are integral membrane proteins that help establish and control the small voltage gradient across the plasma membrane of living cells by allowing the flow of ions down their electrochemical gradient (1). They are present in the membranes that surround all biological cells because their main function is to regulate the flow of ions across this membrane. Whereas some ion channels permit the passage of ions based on charge, others conduct based on a ionic species, such as sodium or potassium. Furthermore, in some ion channels, the passage is governed by a gate which is controlled by chemical or electrical signals, temperature, or mechanical forces. There are a few main classifications of gated ion channels. There are voltage- gated ion channels, ligand-gated, other gating systems and finally those that are classified differently, having more exotic characteristics. The first are voltage- gated ion channels which open and close in response to membrane potential. These are then separated into sodium, calcium, potassium, proton, transient receptor, and cyclic nucleotide-gated channels, each of which is responsible for a unique role. Ligand-gated ion channels are also known as ionotropic , receptors, and they open in response to specific ligand molecules binding to the extracellular domain of the receptor protein. The other gated classifications include activation and inactivation by second messengers, inward-rectifier potassium channels, calcium-activated potassium , channels, two-pore-domain potassium channels, light-gated channels, mechano-sensitive ion channels and cyclic nucleotide-gated channels. Finally, the other classifications are based on less normal characteristics such as two-pore channels, and transient receptor potential channels (2). , The GABA-A receptor is a member of the superfamily of fast acting ligand-gated ion channels. The individual subunits of these receptors have similar sequences and structural features (3). GABA-A receptors are the major fast inhibitory neurotransmitter gated ion channels in the brain (4). , , Applications:, Suitable for use in Western Blot and Immunocytochemistry. Other applications not tested. Recommended Dilution: Western Blot:1-10ug/ml, Immunocytochemistry: 0.1-1ug/ml, Optimal dilutions to be determined by the researcher. Storage and Stability: May be stored at 4°C for short-term only. Aliquot to avoid repeated freezing and thawing. Store at -20°C. Aliquots are stable for at least 12 months. For maximum recovery of product, centrifuge the original vial after thawing and prior to removing the cap. 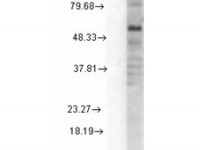 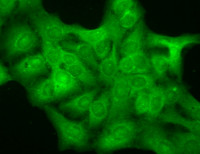 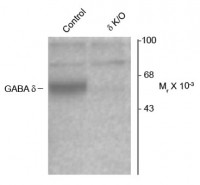